Just as the academy was about to start lunch break.

[Tomonari-kun. What are you going to do at lunch?]

[We are planning to go to the cafeteria…]

Taisho and Asahi-san approached me as I was putting my books away.

[Sorry. I have some things to attend to…]

I explained to Taisho, who tilted his head.

[I’m supposed to keep in touch with my parents during lunch break. That’s why I’ll just eat my bento] (TN: Bento is a lunch box in Japanese, I used it cuz it’s shorter and it’s nice to learn new words) (PR: If you don’t know what a bento is I’ll bonk you)

[Is that so… Tomonari-kun’s parents are rather overprotective]

This was another setting Shizune-san thought of. When I first heard of this setting, I thought “Will they really believe this…?”, and sure enough, both of them had faces that said it was a pity.

[Come to think of it, Konohana-san is also like that, isn’t she? She always goes somewhere during lunch break]

[Ahh… Rumor has it, she helps out her family business on lunch break. I heard she’s on a conference call or something]

As I listened to their conversation, I caught a glimpse of Hinako, sitting in front of me.

[Konohana-san. If you don’t mind, would you like to come to the cafeteria with us?]

[I’m terribly sorry. I have some work to do at lunch…]

[I-Is that so, well then. Sorry for bothering you]

After politely declining her classmate’s invitation, Hinako took her bento out of her bag and left the classroom.

Seeing this, I pulled out my chair and stood up too.

[Well then, see you later]

[Tell us if you ever want to go to the cafeteria~]

After I left them, I went out and immediately looked for Hinako.

Hinako was walking alone down the corridor. I followed her while maintaining a certain distance.

Hinako had been called out many times as she was walking near the classrooms, but by the time she passed through the corridor, the sights from people around her had decreased.

Across the garden is an old student hall. The building is no longer in use due to old age and deterioration. However, considering the academy’s reputation, the building is regularly cleaned.

I went up the stairs of the building to the roof.

After making sure no one was around, I opened the door.

Hinako sits down on the floor and greets me with a relaxed expression.

[…Thank you for your hard work]

I sat down next to Hinako, giving her a proper greeting.

[You always have lunch here, don’t you?]

[Yeah. There’s no one here]

As her caretaker, I have to be by Hinako’s side at all times.

From now on, I’ll probably be spending my lunch here every day.

[It really is a prestigious school, huh. I thought I’d done a lot of prep yesterday, but I’m still having a hard time keeping up with the class]

[Good luck with that… If your grades are bad, you might be dismissed from being a caretaker]

If I hadn’t met Hinako, I would’ve lost my house and wouldn’t be able to go to school. I am in a very fortunate environment right now. I have to do my best not to get kicked out of this environment.

[The bentos, should we eat?]

I opened the lid of the bento with Hinako. The bento, prepared by the servants of the Konohana family, was an extravagant one with plenty of rare ingredients.

[Nnn. But the food at the cafeteria is much more sumptuous.]

[Is that so… You don’t eat at the cafeteria?]

[It’s a pain in the arse, having to worry about people’s gaze]

Hinako said with a sly smile on her face.

She had a completely different aura compared to when we’re in the classroom. If Taisho or Asahi-san saw this, they might be so surprised that their hearts would jump out of their chests. (TN: This might be a Japanese joke I’m not getting, pls anyone tell me if you have any information)

Hinako stretched out her chopsticks and began eating her bento.

However, the food was spilling all over.

Now… I understand the significance of a caretaker.

It was more like nursing her rather than looking over her. For some reason, Hinako is able to behave flawlessly in front of the public, but other than that, she can’t do anything. Speaking of which, when we were kidnapped, she spilled her PET bottle drink.

Hinako opens her mouth as she holds out her bento.

It would be a shame to have her bento spilled all over her. There’s no one else around… Oh well.

I picked up a side dish at random and brought it to Hinako’s mouth.

At Hinako’s suggestion, I reach for my own bento with my chopsticks.

For the time being, I decided to try the standard Dashimaki Tamago. (TN: Dashimaki Tamago is a traditional Japanese omelette, made by rolling thin layers of egg in the frypan)

Once I moved my chopsticks, I couldn’t stop til the end.

The meat, the fish, the salads, everything was amazingly delicious.

[Which one is your favorite?]

[My favorite?… All of them are good, but if I had to say, I’d say the first one I tasted, the Dashimaki Tamago]

[Returning the favor. Ahnn~] (TN: SFX for mouth opening in Japanese, just in case one of you guys misunderstood)

Hinako grabbed a Dashimaki Tamago with her chopsticks and brought it to my mouth.

I felt embarrassed and hesitated when I was doing it, but there was no sign of that when Hinako did it to me.

I had no choice but to open my mouth and eat the Dashimaki Tamago.

[I’m Itsuki’s master. I have to feed him]

Her voice sounded just a little more serious than usual.

It might have been my imagination, but I couldn’t ignore it, so I suddenly spoke up with a question.

[…Before, you had a different caretaker, right? Why did they quit?]

Hinako tilted her head slightly. Keigon-san said they quit because of stress, but as for the reason why they were stressed, it’s still unknown.

[How long did your last caretaker last?]

That’s shorter than I thought.

[Before that, I think it was three weeks… It was a month at most]

Maybe Hinako doesn’t care too much about the caretakers she’s had before.

[Yeah. Because there’s a live-in job with 3 meals a day and 20.000 Yen a day. There’s a lot of pressure, but it’s a pretty good job. Studying at the academy is also really hard… but if you think that you get an education, it’s not so bad]

There are a lot of people in this world who want to study but can’t. I was on that side. Well, I was on the verge of being one.

[The good conditions… What about me?]

I didn’t understand the question.

Hinako puffs her cheeks and makes a dissatisfied face.

[Are you interested in being a gold digger?] (TN: Gold digger is someone who pursues a relationship for money instead of love)

That’s a bad wish, whether you’re interested or not. Originally, I was not in a position to have a conversation with the daughter of the Konohana family like this, shoulder to shoulder.

[…I have no intention of doing so for the time being]

When I answered, Hinako smiled softly, and laid down.

Since there had been a similar exchange when we were kidnapped, I understood her intentions immediately.

As soon as I emptied my lap, Hinako’s head slumped on it.

With her head on my lap, Hinako immediately went to sleep.

Looking at it this way, Hinako’s face is really neat. She is still in her youthful years, but she is far more beautiful than those models.

A normal male student might soar in this situation.

But for some reason. Instead of being aroused, I felt calm.

[Somehow, there’s a sense of distance…]

I was given the easy name of a “caretaker”, but in reality, our relationship is much more mysterious.

But… It’s not as bad as I thought it would be. 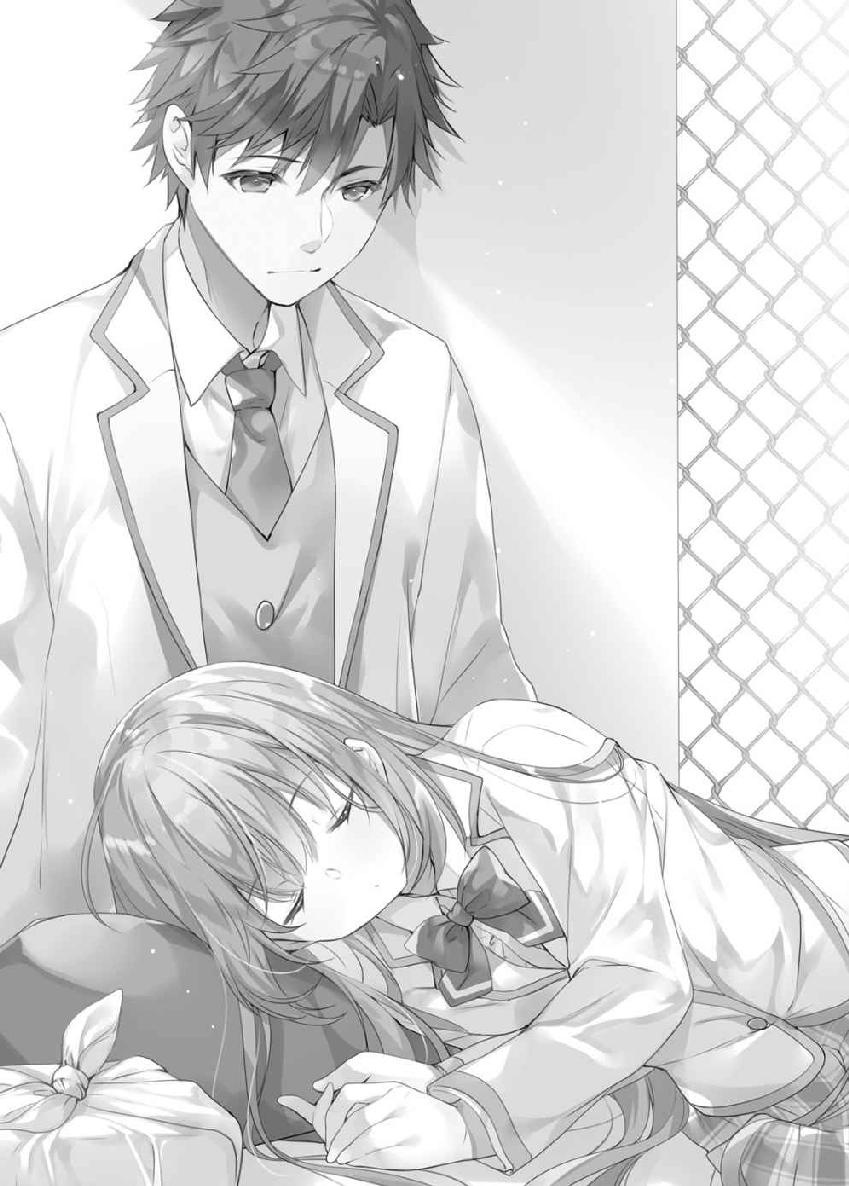 So, surprise surprise, it’s 29th October, which means it’s my birthday! I didn’t plan this whatsoever, so I was thinking to do more, but I realized I would have more things to do with my family, so that’s a story for another day. If you guys would like to support me, I would love it if you guys can keep reading and comment, it really helps.