Is A Girlfriend Who Can't Say "I Love You" No Good? Houkage-san Reads Light Novels Too Much - Prologue

Prev
Next
Hello fellow viewers, there has been reposting of our translations on different sites. We would like to make everyone aware that it was done without our permission.

I had been checking every minute, but there was still no change in the call history of my smartphone, which wasn’t on airplane mode.

Nevertheless, I gave periodic glances to the smartphone in my hand as I made my every move, the simulation game’s units displaying my actions on the TV screen. The game progressed slowly due to my lack of concentration, and at this point, I had completely memorized the background music that looped over and over because of how long it was taking me.

It was past nine in the evening. The time after school, dinner, bath, and the point when I tend to get caught in a sleepy stupor even though it was still too early for me to go to bed.

The season of chirping insects had yet to arrive. In the not-so-large room, all that was stirring was the faint flicker of the old fluorescent light and the melody of game music…

The voice of the secretary character, who urged me to hurry up since I hadn’t done anything for three minutes, echoed strangely clear and made me slump. I had to concentrate on the game, so I turned back to the screen.

That’s when it happened.

My door burst open out of the blue.

There was only one person so discourteous in the Aramaki household as to intrude in my room without knocking. There was only one miscreant who could walk across the room and turn off the game console without hesitation.

He was taken aback for but a moment, after which he immediately stood up and protested against the intrusion.

“What was that about, 20 minutes? You’ve been on it since you got home from school, right? Don’t you have homework or something?”

It’s always like this when Hayu visits my room. “Gaming again?” “Manga again?” “Anime again?” “Don’t you have anything else to do?”

“You’re making me say it. Don’t you have anything better to do?”

I knew she would say that. If my sister, who is an excellent student, has many friends, and the president of the student council in the second and third years of junior high school, says that, I feel ashamed as an older brother who has no special skills and only stays in his room playing games and reading books.

I urged her to go on, as there was no end to what she could do if she did as she was told. She didn’t answer but instead sat down in front of me. Hayu, who usually sits criss-cross inside the house, restricted herself to sit on her knees today.

Her legs, folded under her shorts, rubbed restlessly.

There was something strange going on. Whenever she comes to my room, it’s usually to give me a message from my mother, like when it’s time for dinner or when the bath is ready. Sometimes she comes to ask me about something she doesn’t understand, such as when she has to take a final exam, but it’s still the middle of spring and she hasn’t started high school yet.

I sat back down too, but I didn’t sit straight.

When I turned to face her, I saw that she was a cute little sister. Unlike me, who had a plain and dull face, she had a soft face and beautiful nose and eyes, and if there were ten people who just met her, nine of them would have liked her.

Now that she had finished bathing, her hair was tied back into a ponytail, which, combined with her athletic-looking nightgown, reinforced her lively impression.
“… what is it?”

When Hayu didn’t open her mouth at all, I urged her again.

There was still no reply. She looked around at the bookshelves full of manga, figurines, and game consoles with their sad red standby lights.

She muttered something out of the blue. It was a voice full of reproach and disgust.

“It’s none of your business. I’ve been making do with my allowance, and I’m buying these things with the money I save from my part-time job, so you have no right to complain.”

“You used to play soccer.”

“How did you grow up to be such a geek?”

“Why are you saying this from our mother’s point of view?”

It is understandable that she feels shame because her older brother is holed up in his room indulging in his otaku hobby. But I don’t understand, because I thought that would make her ignore me or stay away from me, but on the contrary, she is trying to get involved with me.

As for school, she was enrolled in the same school as me even till senior high, excluding junior high. Her reasoning, “because it’s close and easy to get to,” had much persuasive power, but having a younger sister in the same school was somewhat difficult.

However, Hayu didn’t seem to care about my exhaustion and kept her mouth agape.

“It’s not that I’m like mother, it’s just that my brother is a mess. He doesn’t have any friends, and he stays in his room all the time. That’s why otakus are …”

Today’s sermon was about to start again. Normally, I would just let it slide and let her leave, but I couldn’t get rid of her if she insisted on it.

I called out her name. My sister must have understood the meaning behind my slightly hardened voice, because she let out a sultry squeak.

“You’re not here to lecture me.”

It was too obvious that she was trying to change the subject. The fact that my sister, who is so unpredictable if it is about me, is so reluctant to talk about it, suggests that it might be a very serious matter.

“If you have something to say, say it quickly. I’ll at least listen to you.”

When I repeated the question, Hayu seemed to have made up her mind. After taking a deep breath, she looked up and stared straight at me.

For a moment, I couldn’t make sense of what she said. It was because of how abrupt the words that came out from my sister, who hates otakus, was.

I don’t know how she took my silence, but she added a few more words.

“It’s a novel with a cover like a manga.”

I myself only occasionally read original works of anime or novelizations of games, but there are some people I know at school who read dozens a month.

So, that’s what it is? When I prompted her with a look in her eyes, she looked at a loss.

“What was so interesting about them?” 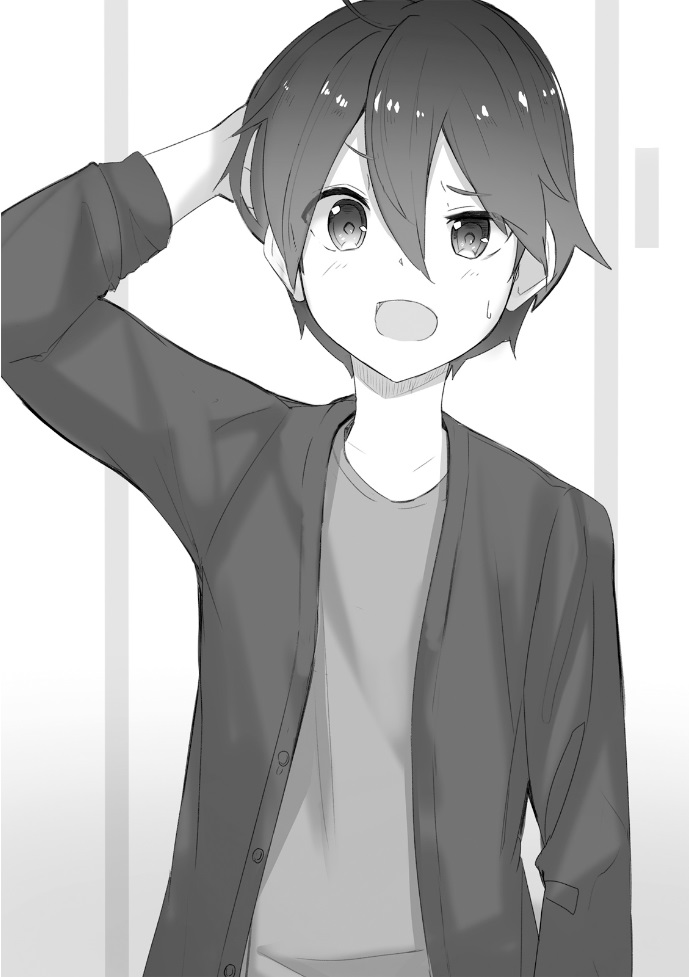 It was a difficult question to answer, in the sense that the question was also too vague.

But before that, why would my sister, who is athletic, proactive, smart enough to represent the new students at the entrance ceremony the other day, and doesn’t even try to hide her dislike of otaku, ask me such a question … and with such an urgent look on her face?

I tilted my head to mirror the bewildered expression on my sister’s face, who looked nothing like me in every way.

I Want To Make The School’s “Silent Princess” Talk, So I Invited Her (Who’s Super Cute) Out On A Date Today. ~Anyways, She’s So Very Intense When It Comes To Skinship, That It’s Going To Take My Reason Away~