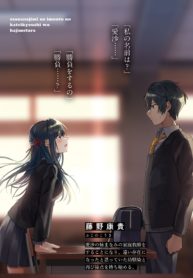 When I start being a home tutor for my childhood friend’s younger sister, the unfriendly childhood friend is angry ~I am completely unaware that she – my high school idol – likes me 幼馴染の妹の家庭教師をはじめたら 疎遠だった幼馴染が怖い

His childhood friend, Aisa Takanishi, is one of the most popular and beautiful girls in his grade. Unlike when they were children, now, she was a distant presence. But, while Kouki thought that way, Aisa was….? When Kouki becomes the tutor for Manami, Aisa’s younger sister, the two began to make contact again. A romantic comedy about Aisa, the class idol who can’t be honest, and Kouki, who is scared of her cold attitude.

I want to make the school’s “Silent princess” talk, so I invited her (who’s super cute) out on a date today. ~Anyways, she’s so very intense when it comes to skinship, that it’s going to take my reason away~

His Childhood Friend is a Beautiful, Reclusive Girl, So He Spends His After-School Hours in Her Room (But He’s Not Her Boyfriend!)