ED: samheart564 (might have someone check later)
Proofreader: mpk & co.

*TL Note: All quote citations are of character FIRST names. For a name list, click here (no spoilers don’t worry!)

A light chime rang out, signaling the end of a slightly tense class period.

This was the last class of the day. I don’t have anything to do after school, so I’ll just go home.

I was humming to myself as I prepared to go home, and just then.

Just as I was getting ready to leave, a girl stood in front of me with her arms crossed, looking as if she wanted to say, “I’m displeased.”

Her father is Japanese and her mother is a foreigner. She has medium-length blond hair.

Her eyelashes are long and her eyes almond-shaped. Her eyes are a fiery scarlet hue.

She has perfect beauty, far from Japanese. She radiated s*x appeal.

Her proportions are so overwhelming that it’s hard to believe she is a high school student.

It’s a natural instinct for boys to be attracted to one part…And, that part was effortlessly visible even over the thick jacket of her blazer. In a word it was huge. That’s it.

Without a doubt, this girl is one of the best beauties in the entire school.

“Hey, how would you feel if I suddenly stood in front of you?” (Akito)

She was so violent that even I was turned off. She hates me too much, doesn’t she.

No, I can’t speak for others either, can’t I.

We’ve had a rotten relationship since junior high school, and she’s always trying to get at me.

Kuonji opened her mouth with a small sigh.

“Sanada. You’re the only one who didn’t turn in your math notebook.” (Riran)

“How do you know about that? Are you stalking me or something?” (Akito)

“What? No, of course not. I’m collecting the notebooks because the teacher asked me to. Sensei is dependent on me, you know.” (Riran) [TLN: Sensei = teacher, but you probably know that.]

Kuonji pointed at the teacher’s desk with a satisfied look on her face.

Forty notebooks were piled up on the teacher’s table, quite a lot. No matter how you look at it, it’s not enough for one girl to carry.

…Well, it’s none of my business, so let’s just give it to her and get the h*ll out of here.

When I handed her the notebook, she took it with satisfaction and tried to hold the pile of notebooks.

But there were so many that the pile was unstable, and looked like it was about to collapse. There are forty people in the class after all. I guess that’s what’s to be expected.

I mean, Minowa-sensei, don’t try to make a girl carry this much.

From her trembling hands and feet, I can clearly see that she is far from alright.

As I finished preparing to leave and put my backpack on my back, I took most of the notebooks that were about to fall apart.

Kuonji was taken aback. She looked at me and the five or so notebooks left in her hands dumbfounded. Her face turned bright red and she became furious.

“I can’t just turn a blind eye to that. I’m not so heartless as to just leave.” (Akito)

She’s a disciplined girl, going out of her way to thank her natural enemy.

And that voice is…

“Ryūgūin. I’ve been saying this for a while, stop teasing me like that.” (Akito)

“I have nothing to complain about.” (Akito)

Kuonji bared her fangs at me. You’re a dog, aren’t you?

Ryūgūin, who was happily watching our exchange, hugged Kuonji and patted her on the head.

“H-Huh!? What are you talking about Rion! There’s no one as straightforward as me.” (Riran)

It’s like the smile of Virgin Mary. Really, Ryūgūin is so cute.

She has long, straight, fine black hair. Her eyes are as black as her hair, and calm and serene. The mole under her left eye is sexy and seductive. Her chest is modest, but her arms and legs are as long as a model’s, and her face is small enough to make up for it.

She is “The Yamato Nadeshiko.” Yes, “Yamato Nadeshiko.” That’s the word that fits her, Rion Ryuuguin. I really want Kuonji to drink some of Ryuuguin’s nectar. I’m sure she’ll become a little more mature, reserved, and pretty.

“Did you just think about something rude?” (Riran)

As I walked down the hallway with the notebooks in hand, Ryuuguin, who was walking alongside me and Kuonji, opened her mouth as if she remembered something.

On that day, a red thread appears on the ring finger of the left hand of boys and girls who will turn sixteen this year.

It’s a strange disease, the “Red Thread of Fate Syndrome.”

The thread is said to connect to someone around the world who is around the same age as you, and it suddenly appears on that fateful day. At the same time, you can see their face in your mind.

It has no known cause, and the thread cannot be cut or burned.

No, in the first place, it’s not a disease, but a miracle given by God.

That’s why the red thread that appears on the right finger of your left hand is called the Red Thread of Fate.

I’m not sure who my Red Thread of Fate connects with. I’m curious about who it is.

Even as I’m this curious about it, Ryūgūin was holding up her left hand and her eyes were sparkling.

“I wonder what kind of person I’m connected with. I’m looking forward to it, Riran-chan” (Rion)

“Oh, really? Don’t you hate it when someone decides who you like regardless of your will?” (Riran)

“Riran-chan, even if you hate it, it is still your Fated Person” (Rion)

Indeed. As my parents told me, they fell in love with each other the first time they met.

No, actually, they said that they liked each other from the moment they saw each other’s face in their minds, to the point of thinking about marriage.

The “Red Thread of Fate” is that mysterious, huh?

I don’t want to be greedy, but I want someone with big b**bs who can spoil me gently. I’m not greedy.

While I was thinking that in my mind (not a delusion!), I could see Kuonji glaring repeatedly at me out of the corner of my eye.

You’re looking away from me, aren’t you?

“You were looking at me. If you have a problem then I’m all ears.” (Akito)

“You were watching me.” (Akito)

She’s so stubborn, this girl…Well I guess it doesn’t matter whether she’s looking at me or not.

While we were talking, we arrived at the staff room.

Kuonji opened the door of the staff room.

Ms. Minowa, the math teacher, noticed this and looked at us smiling. She is an elderly teacher who is affectionately known as our school’s grandmother.

“Ara Ara. As usual, Riran-san and Akito-kun are as close as ever, aren’t they?” (Minowa-sensei)

“See? You both are perfect together.” (Minowa-sensei)

“I’ll be happy if both of you are fated together.” (Minowa-sensei)

It’s been that way since middle school. I don’t remember doing anything to make her resent me, but she just keeps coming after me.

I don’t know what the h*ll she’s trying to do.

Kuonji threatens me by sticking out her small tongue. Well, I already know about that move. Geez.

When we left the staff room, Ryūgūin, who was waiting in the corridor, came running up and hugged Kuonji.

Ryūgūin sticks out her tongue playfully. So cute!

“I wouldn’t mind being held by you either, Riran.” (Rion)

What the h*ll is this yuri development?

…I’ve got nothing to do, so I’m heading home.

As I turned my back on the two of them, Kuonji snapped at me.

You sure you aren’t my mom?

After school, I come home and do my usual daily routine, read light novels, and the new manga that came out…to be honest, I couldn’t concentrate at all.

The truth is, I’ve been on edge since after school, and I feel like I’m having the longest day of my life.

Hmmm. I wonder what kind of person is my Fated Person. Is it a Japanese person or a foreigner? I’m curious.

Well, I don’t have to worry about that since English has become the universal language of the Red Thread of Fate.

My heart beats faster with nervousness, but the second hand on the clock doesn’t speed up. It just keeps ticking at the same pace as usual.

As I mentioned earlier, my parents and relatives say that when they see a red string, the image of the other person comes to their mind.

I’m sure they didn’t know their Fated Person’s name, but they couldn’t stop thinking about them.

I wonder what kind of person is my Fated Person…I hope it’s a beautiful person or a cute person.

If Ryūgūin was my Fated Person, I would be happy. Although, I’m not sure if that’s possible…

I look at my watch. It was only five minutes before the date changed.

I’ve lived for sixteen years, but this is the longest ten minutes of my life.

I shivered even though it was not cold, and my heart continued to beat fast.

Medium-length blond hair. Scarlet, almond-shaped eyes. Her b*easts are too big for a high school student.

In my mind, a beauty that is far from Japanese is smiling kindly at me.

And this person is… 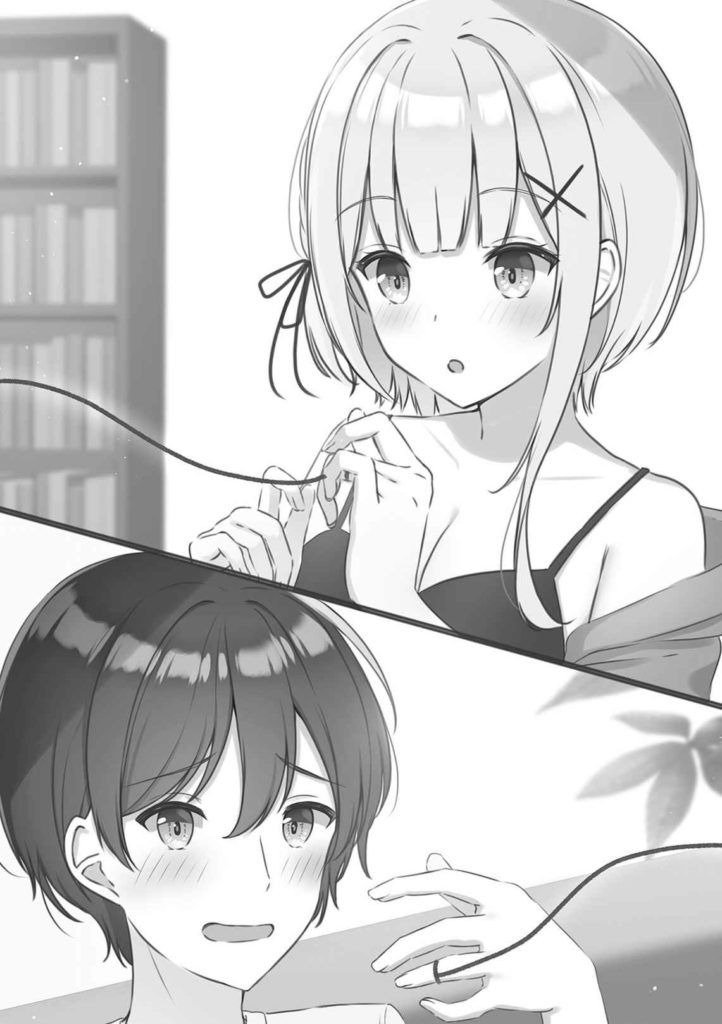 There is no doubt that the red thread of fate appeared on the ring finger of my left hand.

And in my mind, I can see Sanada’s face.

Sleek black hair that is neither too long nor too short. Long, almond-shaped eyes.

He seems to be kickboxing and training, and has a toned body.

Sloppy. Messy. He always has a girl or two around him.

I don’t know what I’m supposed to look like tomorrow!

Thank you all for reading this chapter! I got a kofi if you wanna support me, anything is appreciated. I have no idea when chapter 1 or beyond will come out, but all the illustrations are out! Check the table of contents for the link, or click “next chapter.”

I want to make the school’s “Silent princess” talk, so I invited her (who’s super cute) out on a date today. ~Anyways, she’s so very intense when it comes to skinship, that it’s going to take my reason away~

The girl who cheered me up through a “consultation app” after I broke up with my girlfriend of three years was a beautiful girl who was secretly one of my classmates – who wouldn’t fall in love with someone who told them “I’ll be there for you until the day I die.”?