The Girl Connected to my “Red Thread of Fate” was my Natural Enemy - Volume 1 - Chapter 2.4

“Hey, Sanada-kun. Seriously, who is that girl? Just tell me in secret.”

Ryūgūin, who had been fidgeting so much just a moment ago, suddenly burst into a chuckle. This girl was enjoying this too.

Ryūgūin then stood up and intervened between Kuonji and Kotono.

“What are you talking about? How can I back out now after coming this far?”

I beg you, please back off. The two of you were making so much noise, the other customers were looking in our direction.

“Wow, the kids in those seats are so high leveled.”

“How great is that guy those two girls are fighting over…!?”

“I think he’s just a scumbag…”

Don’t make assumptions like that! I’m just a victim here!

But even with such stares, their exchange escalated.

“You’re such a b*tch to make a move on another man when you’re already in love with someone else.”

“So are you! I think you’re the one who’s obsessed with Aki-kun.” 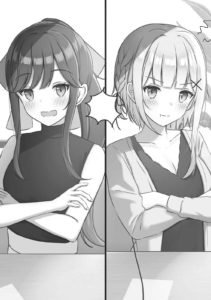 I was eating my hamburger silently while looking away at them, when Kuonji stared at me with tears in her eyes.

“Hey, Sanada! I didn’t think you were the kind of guy who’d go with a sl*t like her!”

Teary-eyed Kuonji grabbed me by the chest. Wait, I’m against violence!

…Wait, no. It’s not about the violence; rather it’s about the look on her face when she’s in a very bad mood with her eyes rolling around.

Hey, relax! You’re not in the right mind right now, so you should shut up or else you’re definitely going to say something weird!

However, Kuonji didn’t get my thoughts.

“All you have to do is look at me for the rest of your life!”

She just dropped the biggest bomb in history.

Kotono’s eyes widened, and Ryūgūin was elegantly surprised with her hand over her mouth.

Kuonji had a “Now I’ve done it,” plastered on her face.

“HAA!?? Are you seriously saying that this is Kotono-chan!?”

“Wow~ What a beautiful woman…”

I never said about her being beautiful, you idiot.

We went to a different venue, and now we’re at a plaza on the roof of the shopping mall.

There was a huge jungle-themed playground for children and a rest area for parents to take a break.

We were sitting opposite each other in one of the rest areas.

In case you are wondering, next to me was Kotono, in front of Kotono was Ryūgūin. Which left Kuonji directly in front of me….

“Ehh…I did think she looked mature, but isn’t this too much of a change…? She looks like a college student right now…”

“This energy is Kotono-chan all right…”

Kuonji bitterly smiled. Well, she was still a child inside.

Kotono gulped down her royal size milk tea in one gulp and then leaned forward while feeling excited.

“Don’t worry about me! More importantly…Rion-tan~”

The two of them then raised the corners of their mouths like clowns.

Did they both get along with each other now…? Oi, what’s with that communication ability?

Then, while drinking tea, I thought about how to muddle through the bombshell that was said earlier. Damn, what should I do…?

…I mean, Kuonji just dug her own grave, so why should I have to clean up her mess?

I glanced at Kuonji sitting in front of me. She seemed to be pondering the same thing while drinking a can of hot chocolate.

…However, she was clearly upset and her hands were shaking like crazy.

“Riran-chan, care to explain what you said earlier?”

Hey, don’t give me that reproachful glare! It’s your fault to begin with!

But…you splendidly said that bombshell statement earlier, so there’s no way you can make an excuse for it.

To get updated on all of our series, you can join the discord server.

I, a Lonely Otaku Was Surrounded by Some of the Most Beautiful Girls on Campus and Was Called Riajuu Before I Knew It