The British Girl wants to say "SUKI" not "I Love You." (LN) - Prologue

It was past noon on a holiday. Slightly warm rays of sunlight could be seen illuminating the room of a certain 1K-type apartment. [ED: 1K-type means one room and kitchen]

The interior, despite the absence of vibrant colors, was well-designed, and the objects lining the inside of the room were neatly tidied up, enough so that the two of us could sit comfortably across the table from where the textbooks and notebooks were strewn out.

Asked the girl sitting right in front of me, tilting her head slightly to the side while holding a mechanical pencil in her hand.

“I’ve never heard of such a word before, though.”

“Hey now, we learned that yesterday in class, remember?”

“I-I’ve actually heard of it before!”

Which is it?! I retorted inwardly before letting out a small sigh.

She was most likely trying to cover up the fact that she wasn’t paying attention in class… but I hope she could at least realize that it’s already too late.

“It’s fine, Hiiragi… I already know that you’re an idiot.”

She puffed out her cheeks, which had already turned red, and denied it as though it was shameful.

“Alright, if you really insist that you aren’t, try answering this question.”

I suggested, as I wrote down some random English questions I came up with in the notebook before showing it her.

『Which way should I go to get to the station?（駅に行くにはどっちに行けばいいですか？）』

Even though the imaginary person was asking for directions to the station, she answered “Go home,” …what a poor soul.

Are you trying to let a complete stranger go home obediently like a lamb? Why don’t you at least show the guy around?

“That reaction… My answer was correct, right!?”

“You’re completely off the mark.”

I can’t help but wonder how she construed my reaction as her having guessed the correct answer.

Seeing her look dejected, I let out a small sigh.

“Good grief… It’s no use trying to show off now. I already knew you couldn’t answer it in the first place.”

“E-Even I have times when I want to show off too, you know!”

“At times when you’re being taught like this, even if you want to show off, it doesn’t really have any effects; rather, it loses effect.”

That certainly makes sense…. She replied, making a little kvetch before running the pen once again in her notebook.

I might be saying that, but I think the reason why she doesn’t know is because her studying method is simply bad.

In fact, it got to the point where I had to urge her to give up her holidays and use it to study like what we’re doing now.

But really, man… The fact that she can’t speak English despite what her appearance suggests is really unbelievable.

Her blonde hair gleaming just like gold, her blue eyes that are as beautiful as jewels, and her clear, white skin that is somewhat distinct from that of a Japanese person’s.

If one didn’t know anything about her origin, they would probably just think that she was a foreigner who came to visit Japan.

Furthermore, if one would witness her usual graceful atmosphere, one would immediately think that she was a girl who could do things flawlessly and was both gifted with beauty and brains.

But on a closer look, she’s just a simple-minded girl who can’t speak English…

However, taking into account the fact that only her mother’s side of the family are British, it would make sense why she can’t speak English.

On the contrary, her Japanese is good; she can converse normally with me and there’s nothing off about the way she talks or anything.

Well, that might be the case, but her grades in Japanese in the last exams were so bad that even though she was raised in Japan, I felt like she needed to study more.

“Hmph… I feel like Kisaragi-san is thinking something rude about me.”

“How rude. Even though I was just thinking how cute Hiiragi is.”

As I said that, her face immediately turned red, and she was making such a bashful expression.

…See, it’s because of these expressions that led me to think that she’s cute. 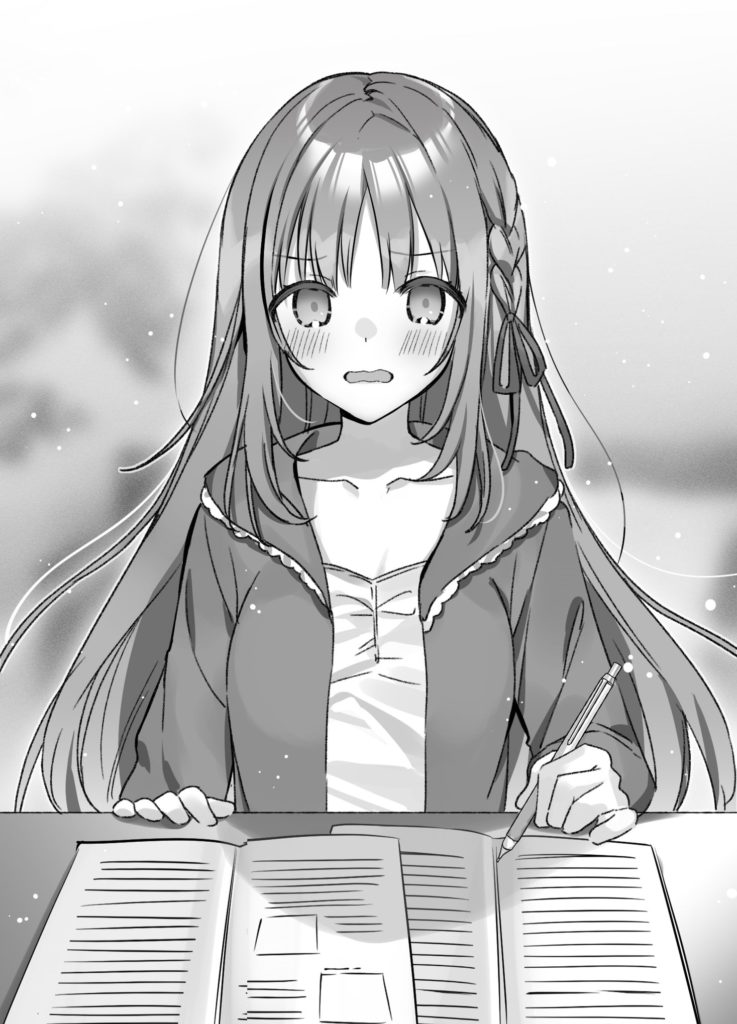 “I’ll also bring one for Kisaragi-san!”

“It’s not a line you’re supposed to say when you’re angry, but thank you.”

As if to hide the embarrassment she felt, she went to the kitchen in quick steps. Then, she pulled the tea out of the refrigerator and opened the shelf in a familiar manner before taking out two cups of different colors.

And when I saw that figure of hers, I thought—

She’s already gotten used to being here even though she’s inside my room, huh.

If it was the me from back then, I would’ve thought of this as something unthinkable.

If my choice of getting involved with her at that time was different, I’m pretty sure that her being here with me right now in my room would’ve never happened at all.

TN: Big thanks to Yan and Char for the raws! And to monke and mpk-kyun for editing and proofreading this chapter! Don’t forget to join our discord for updates! Also, please support the author by purchasing the book!

A Reincarnation Romantic Comedy Of A Hero And A Witch