The place that Haruki brought him to was not a karaoke bar at all, but a place far removed from Hayato’s image.

The lobby was decorated in the style of a tropical resort, and the room they were shown to was a shoeless flooring room with some cushions lying on the floor. If anything, it was more like a party room of some sort.

Hayato’s stereotype was overturned, and he just rolled his eyes.

Incidentally, to Hayato, karaoke is something that old people enjoy while having a party at a meeting place in Tsukinose. And singing while on the bus.

“I’m getting hungry, but I’m also a little tired.”

Haruki slipped off her mule sandals and dived straight into the room, lying down and playing with a tablet device.

She looked as if she didn’t care what other people thought at home, and as expected, her feminine guard was down. Her skirt is shorter than her usual uniform, and her boxer shorts, a piece of cloth that has nothing to do with sex appeal, are in full view covering the base of her flapping legs.

Haruki’s appearance is that of a neat and pretty girl. But for some reason, all Hayato could hear was a sigh mixed with a headache.

Then Hayato silently fixed the hem of her skirt, which had been rolled up.

“Oops, this is an unsightly thing… No, it’s just a reaction to being so careful not to be seen until just now. I’m sorry.”

“…I can see everything, you know?”

“You were thrilled when you realized you were looking at Himeko the same way.”

“Ngugugugu~, What does that mean!? I wonder!? I can’t believe I’m saying this, but I’m still pretty popular, you know!?”

Haruki’s rivalry was switched on, and she untied the left shoulder strap of her summer dress with her usual mischievous smile. Then, making a cinnamon shape to emphasize her breasts, she pressed her body against Hayato’s in a pampering manner.

He couldn’t help but gulp.

It was an act of utmost sincerity, based on a full understanding of her own attractiveness.

It was a destructive force that forcibly removed the best friend filter that had been applied to Hayato just a moment ago.

Even so, Haruki’s eyes were filled with a hint of amusement. Because he could see it, Hayato’s face also showed his regret. And when Haruki acknowledged this, she got even more excited.

It was the intervention of a third party that broke this sterile cycle.

“Excuse me, this is the ripe banana maple syrup pudding honey toast that you’ve ordered.”

A waitress intervened. It was a young female staff member who looked like a college student.

When Hayato and Haruki noticed this, they distanced themselves from each other as if they had been repelled, and for some reason ended up sitting on the floor.

Both of them had red faces and sweat on their backs. they could only hope that they could leave soon.

“This is your serving plate… or is there more you’d like to order?”

The waitress did her job with a smile, not caring what Hayato and Haruki were thinking. However, before leaving, she nailed them with a warning.

“*Clears throat*. This is not the proper place for that sort of act, so please refrain from doing that, okay?” 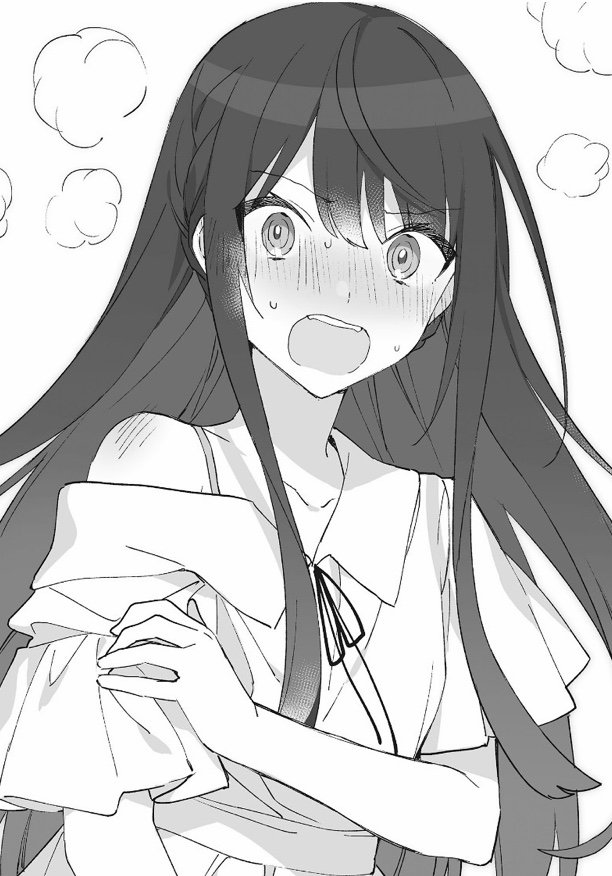 Then the door slammed shut.

Even though it was just an extension of their banter, from the perspective of others, there was no excuse for what they were probably doing something…erotic.

“Wait, calm down, Haruki. But I can’t deny that it was a little bit naughty.”

Unable to stand the embarrassment, Haruki charged into the huge honey toast.

A whole loaf of bread, not only covered with butter and maple syrup, but also with some ripe bananas and pouting, decorated with a colorful ice cream and whipped cream, is a mass of sweetness. It’s a conglomeration of fat and sugar that you should never think about the calories nor the aftermath.

She threw it into her mouth without a second thought.

Hayato was not to be outdone by Haruki, and without using a plate, he challenged the main dish.

The two red-faced childhood friends are gobbling up the sweetness in a desperate attempt to hide their embarrassment.

Such a sight jumps into each other’s eyes.

“What the hell are we doing?”

They found it irresistibly funny.

Before they knew it, they were looking at each other and laughing, just like when they were kids.

An hour later, with their stomachs full, Hayato and Haruki ended up leaving the restaurant without singing once, partly because of the indescribable atmosphere.

Which seemed to reset the mood and gave him a sense of déjà vu.

(Well, in the past, even if we had a fight, we used to play it off the next day like it didn’t happen.)

Remembering this, he reaffirmed their unchanged relationship, which made him chuckle.

“Well, you know, it was the first time we went to a karaoke bar and we didn’t even sing anything.”

“Oh, that’s right. We just had lunch after all.”

Then she stared at Hayato’s face and tilted her head.

Even though it was Haruki, Hayato felt uncomfortable when she was staring at him so intently. He furrowed his brows and stared back.

“What? What are you even saying?”

“Just now, I was wondering if what we are or we’re… on that kind now! But! Hayato is Hayato, and I’m me, and so… what the hell are we?” [TLN: Err, I tried my best, doing this sentence kekw.]

They both tilted their heads.

Haruki had a good point.

It was a strange relationship when they thought about it.

However, he can’t help but be confused, as if the relationship is still the same.

They laughed at each other with troubled faces, saying such things. Unbeknownst to him, Hayato was holding Haruki’s hand, just as he had done in the past.

It was a completely unconscious action.

It’s an ingrained habit, you could say.

Haruki reacted with a twitch from the linked hands, and Hayato finally realized that he had held hands with her.

When a man and woman of his or her age hold hands for no reason or reason at all, it takes on a special meaning.

Hayato noticed this and tried to pull his hand away, but Haruki squeezed his hand in return, and although Hayato was confused, he could tell from the palm of his hand that he wanted to keep it that way.

Is that okay? When he looked at Haruki’s expression, she nodded her head, her ears and neck turning red. Then, without looking at each other, he turned away and whispered in a resentful voice.

“Really, I’ve always been pushed around by Hayato…”

“What? If anything, I’ve been pushed around by you more than myself. Physically speaking.”

Haruki then pulled him towards the crowd of people.

(Clearly I’m the one that’s being pushed around, aren’t I?)

Hayato thought about this as he was being pulled along.

It seems to him that this is an indication of a relationship that has never changed.

He felt like he was bringing back something he had once let go of, a void that had been severed.

A crowd of people gathered. A destination that attracted the attention of many people.

Haruki’s face faded to a pitiful pallor when she saw the person at the end of the crowd, and she froze.

Nothing stays the same― this was something that Hayato and the others knew very well.

The clouds were drifting away in the city sky, just like in the countryside.