It’s Sunday morning, the day when Hayato and Haruki went out to pick out Hayato’s phone.

Himeko, who had been occupying the TV in the Kirishima living room since early in the morning, looked suspiciously at her brother when she saw him.

“Onii, the straw hat won’t do after all.”

“Eh, really? What about heat stroke…?”

“Thanks to the buildings, there are plenty of shadows and stores where you can rest and cool off… It’s not like Tsukinose where there’s nothing around, you know?”

Plain shirt and denim bottoms. So far, so good. For better or worse, it’s a safe outfit.

But going out with a straw hat on top of that, it was as if he was going to help out in the field. As expected, Himeko complained about it and couldn’t stop thinking about her brother.

“That reminds me, why do we have to meet there? Our houses are so close, why don’t we just go there together?”

Then, Hayato’s next words changed her conviction, “Oh, he doesn’t understand at all!”. Himeko stopped the recording and turned to face Hayato, where he flinched at the power of her words.

“Listen, Onii, yesterday, I went shopping for clothes with Haru-chan.”

“In other words, this is the first time Onii’s going to see it. Since that’s the case, we have to set up a proper stage for the unveiling. It can’t be in front of the house. Do you understand?”

(It’s a bit absurd to expect Onii to understand the heart of a maiden… Besides, Haru-chan is still Haru-chan after all.)

Himeko thought about her brother and her childhood friend, and then let out a sigh of exasperation once more― and turned to the television.

“Ah, Onii, don’t forget the papers on your desk.”

“Is this Dad’s account… on the parental consent form?”

“Yes, I’ve already stamped it on the DL. You’re going to use the same carrier as me, right?”

“Cell phone company. You don’t know anything about that?”

Suddenly, a strange voice escaped from Hayato’s mouth. His eyes were fixed on the TV. A similar voice leaked from Himeko.

The drama had just reached its climax.

A man and a woman are having an affair and are hugging each other in bed when the wife enters with a knife.

It was a very intense scene, and it was no wonder that Hayato was making strange noises. Himeko, as expected, flushed and froze in embarrassment.

“It’s a drama called Ten Years of Solitude, and a girl in my class said it was funny! The actress is amazing! There are a lot of rumors about her in her personal life, like she’s a divorced woman or a woman in love, but that’s why she gives such a true performance…”

“…Yes, I will study for my exams in moderation.”

This time, Himeko was exposed to Hayato’s gaze.

They met at the local station where the store was located.

It was three stops from the nearest station on a busy train he had ridden on, and an additional short 20-minute train ride away. It was the same station that Himeko and Haruki had visited yesterday, one of the largest in the region, and also the center of the city.

The station was like a maze of underground and above-ground stations served by several private railways.

Hayato had been surprised when he went to the hospital yesterday, but this was more than a surprise, it made him feel uneasy.

Hayato left the house to arrive at the meeting place 10 minutes early, but since it’s his first time going around the city, he couldn’t navigate around the station as much as he wanted and felt as if he was lost.

By the time he managed to get to the meeting place near the bird object, he was at least five minutes late.

Since it was Sunday, the place was overflowing with people and it would be difficult to find Haruki with pinpoint accuracy. For the first time, Hayato felt the need to use his smartphone.

He raised one hand and tried to call out loudly, knowing that Haruki would be angry with him later.

He was suddenly embraced by a girl, who pulled him towards her.

Behind her, two frivolous-looking men were chasing after her. No matter how you look at it, it was some kind of pick-up.

“What the hell, are they really with a guy?”

“Rather than being so late, why don’t you come with us?”

She was a beautiful girl who stood out.

A fresh white summer dress with ruffles on the hem with distinctive shoulder straps, flowing black hair braided into a half-updo, she looked like some kind of innocent young lady, a beautiful girl that Hayato had never seen before.

If a girl like her was waiting alone, it would be difficult not to call out to her as they did.

She forcefully pulled Hayato’s arm and tried to lead him outside. She seemed to want to get away from the two men who were picking her up, so she pulled his arm very hard and walked with her legs wide apart.

Hayato couldn’t react to the suddenness of the situation and was left to his own devices. He was completely confused.

Hayato is an adolescent boy.

There was no way he wouldn’t be thrilled to have a beautiful girl like her in his arms. And if he could feel the softness of her breasts on his arm, it was understandable that he would blush.

A few minutes after getting out of the station, Haruki, a beautiful girl, finally stopped and left his arms and turned around, making an angry face.

“That’s why I told you, a smartphone is a necessity and you shouldn’t be without it.”

“…I know that firsthand now.”

He can’t quite put his finger on it, but Haruki’s cheeks were puffed up and she looked different from usual.

The parts of her face looked the same as usual, but the way she was dressed made her look more attractive than usual.

Haruki’s face looked the same as usual, but she looked more attractive than usual. Hayato turned his face away from her. Even her br**sts were buzzing annoyingly.

Haruki found out about Hayato’s blush, and the anger she had felt earlier disappeared as she grinned mischievously.

“Oyaoya~… Could it be that, you’re embarrassed by looking at me, Hayato?”

“Wha…!? It’s nothing! Are you even wearing makeup today?”

Then, Haruki turned her body around. 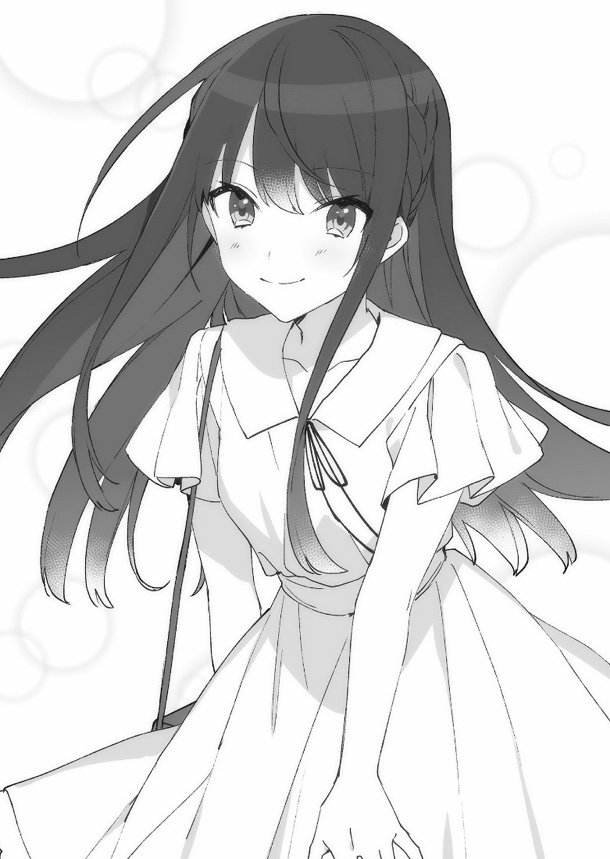 Her long, black, well-groomed hair flowed about her, and the short, lacy skirt of her dress spread out softly, revealing a glimpse of her healthily toned white thighs.

Hayato scratched his head as if to deceive her, but it was impossible to hide his agitation from Haruki.

Convinced of her victory, Haruki smiled contentedly and even tried to take Hayato’s arm to make more fun of him.

That was the true feeling that came out of Hayato’s mouth when he was overwhelmed. Haruki knew that, that’s why he understood it completely.

Haruki, who had been hit by such a strong counter in her defenseless state, turned her eyes around as emotions arose for the first time in her life.

Haruki, who was more overwhelmed than Hayato, forcibly pulled Hayato’s hand and walked away.

The two of them were somewhat uncomfortable.

Still, as they walked, they began to calm down.

However, their faces were still red.

She’s not going to rehash the conversation. But Haruki whispered something that she really wanted to say.

The sky was blue with not a single cloud visible in the vast sky, and it was going to be hot again today.

Translator’s Afterword: Thanks to @mikeds from our discord server for the help with this chapter! I got confused with the chapter title already and the illustration to use for this chapter. Thanks again!

I Know That After School, The Saint More Than Just Noble