Since I’ve Entered the World of Romantic Comedy Manga, I’ll Do My Best to Make the Heroine Who Doesn’t Stick With the Hero Happy. - Chapter 71: I Knew My Favourite Heroine Is The Best

TLN: I’m really sorry but I mistranslated Rinke’s name all this time. From now on it will be corrected to ‘Rie’. Thanks to everyone who pointed it out.

AN: It’s been a while since I posted again.

I’ll try to write as much as I can, so thank you for your patience.

I was at home, watching TV on the living room couch, when a thought suddenly occurred to me as I muttered it out loud.

My younger sister, Rie, who was watching TV on the sofa alongside me, asked me curiously.

“Why do you want one all of a sudden?”

“I don’t do any club activities, so I have a lot of free time after school. I thought I might as well earn some money with a part time job instead.”

I used to have a part time job before I came to this world.

It’s been about two months since I entered the world of the rom-com manga “I can’t have a normal romantic comedy because my childhood Ojou-sama is in the way.”

With the change of the season, my uniform has turned into a summer uniform now.

I’ll never forget what has happened in these past two months.

I met Sei Shimada, who was my favorite heroine in the manga and confessed to her the instant I actually met her. After many encounters, we ended up going out with each other.

It was a really unthinkable situation back in my previous world.

I’m so happy that I’m a little scared that this was all just a dream and I would just… wake up someday.

Well, leaving that aside, before I came to this world, I was working a part-time job.

The reason why I was working part-time was because I wanted to earn money in order to buy merchandise and other things about Sei-chan. To support her of course.

But now that I entered the world of the manga and even managed to somehow go out with Sei-chan, I can just pay my tributes to her directly.

I wonder if there is such a thing as happy spending or not.

But now that I don’t have a part-time job, I have no money at all.

There are a lot of events coming up in the summer, so I want to save up some money before then.

“Money will be a must if I want to continue my relationship with Sei-chan, right?”

My Sister, Rie, met Sei-chan already and knows that we are lovers..

I myself am kind of embarrassed to call myself her lover. [TLN: Explode!]

“Yeah. What kind of a part-time job should I do?”

“Maybe a waiter or a clerk?”

I had a job like that in my previous life too.

“I think I’ll go to a place nearby that’s looking for part-time cafe workers.”

“I think I can learn some light cooking at the café, and then I can serve it to Rie as well.”

Rie smiled with the corners of her mouth raising slightly.

Hnng, my sister is so cute.

I couldn’t help but reach out and pat her head.

“I’ll make a delicious meal for sure, just wait and see!”

We spent the rest of the day at home having trivial conversations like that.

The next day, during lunchtime at school.

The five of us had our desks together and ate in the classroom as usual.

“Yuuichi, I made your lunch again today. I recommend the Hamburger today. It’s a bite-sized one, but of course it’s homemade.”

“Nah, I always say this, but it’s so embarrassing.”

“I worked hard all morning just to make this for you. At least give me a small reward for doing so.”

Sitting in front of me, The person that was being wrapped around a girls finger is the protagonist of the “Ojojama” manga world.

And the one who gave off such a strong pressure to make him go “Ahh” was the Ojou-sama type heroine, Kaori Tojoin.

As usual, Tojoin-san is extremely proactive towards him.

“Shigemoto-kun, I’ve made a little something too, will you eat it? I made dashimaki eggs.”

“F-Fujise, you don’t need to do this if you’re embarrassed.”

“A-Ahhhh… This is delicious too?!”

The other heroine, Shiho Fujise, was sitting next to Yuuichi.

Both her and Tojoin-san had a rivalry over Yuuichi and were competing for his love with an “Ahh-” scenario.

“So Fujise can cook too, huh?”

Fujise gave a very happy smile when she was told it was delicious.

She was originally the type of heroine that was incapable of making anything edible.

But we borrowed Tojoin-san’s house to practice for a while, and she grew to be able to cook as good as an average person.

“Sei-ch-…Shimada, you look like a parent watching over her child.”

And the girl next to me watching over her best friend Fujise, is my girlfriend, Sei Shimada. [TLN: Our girlfriend D:<] [EDN: Dead, I don’t think the story allows that to be true.]

Since Sei-chan was the one who worked the hardest to try and fix Fujise’s poor cooking skills, she must be happy to see Fujise finally being able to cook something for Yuuichi.

That was rather dangerous though, since the only time I’m allowed to call her ‘Sei-chan’ is when we’re both alone.

“I heard from Shiho yesterday, that she was going to make her bento all by herself today.”

“Ahh, that’s great. It was only a while ago when we were watching over her make dark matter.”

“You’re really looking at me with the gaze of a proud parent… By the way, you made that bento yourself right?”

“Ahh, yeah, I make one pretty much everyday.”

I took a look at Sei-chan’s lunch box and saw that it had some tasty looking side dishes inside.

Sei-chan is skilled enough to be able to teach Fujise how to actually cook. So I’m really interested in her cooking.

Sei-chan and I haven’t told everyone that we’re dating.

That’s why Sei-chan was using such a roundabout way to be able to feed me, just to make sure that nobody knows we’re dating.

“I’ll give you some of my lunch then. But mine was made by Rie.”

“Well I’m looking forward to it since I’ve never had Rie’s cooking before. Can I have that omelette?”

Sei-chan took an omelette from my lunch box.

“Which one do you want, Hisamura?”

“I think I’ll have that egg roll.”

The moment I reached out to take it, I hesitated.

Kuu… I wanted her to “Ahh~” me like how they had done so to Yuuichi.

I’d be insanely happy if Sei-chan did it for me, but it definitely doesn’t seem possible to do so here.

If she does that, everyone will instantly know that Sei-chan and I are dating.

If that happens, the jealous glares that were supposed to be on Yuuichi would instantly be targeted towards me instead.

To be honest, I can indulgently accept those glares of theirs, but I can’t let them find out at all. It’s simply because Sei-chan wants to keep the fact that we’re dating a secret.

I froze suddenly, so Sei-chan asked me curiously.

I moved my frozen hand, which had stopped midway, and picked up the omelette that Sei-chan had made.

Sei-chan and I ate our omelettes almost simultaneously

“MMM! Delicious! As expected of Shimada.”

“Your egg rolls are good too.”

“I’ll tell Rie that Shimada said it was delicious.”

With that, we proceeded to eat our food.

“Speaking of which. Hisamura, why did you freeze earlier?”

“Hmm? You mean when I reached out for the omelette.”

“Yeah, you had a conflicted expression on your face randomly.”

As expected of you, Sei-chan, how could you have seen through me in just that quick of a moment.

Yuuichi and the others were no longer around and no one was paying any special attention towards us right now.

I moved a little closer to Sei-chan and spoke in a tone so that only she could hear.

“Actually I wanted Sei-chan to do it like what the others did to Yuuichi.”

My words were met with an instant reaction from Sei-chan with her cheeks flushing scarlet.

Sei-chan glances around and then speaks in the same tone as mine.

“T-That’s not something we can do here.”

“Yeah, so I gave up and took the omelette as usual.”

Sei-chan looked around again and made sure no one was looking and said it in an even quieter tone.

The moment she said that, my heart skipped a beat.

Kuu, I thought I was going to die…! That was dangerous!

It’s so cute and sweet, but I can’t help but think that she’s trying to torture me by saying such things that I’m just not used to.

Sei-chan turned bright red and looked away instantly after that.

Haah, my girlfriend, Sei-chan, is just too cute!

“Since I’ve gotten into romantic comedy manga, I’ll do my best to make the losing heroine happy.” is going to be published as a light novel!

The label is [Sneaker Bunko].

The release date is February 1st!

You can see the cover down below.

So please take a look. 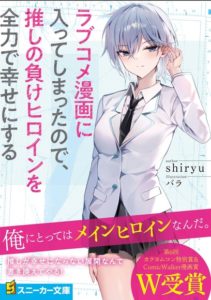 [TLN: If you really enjoy the story and would like the support the author, please buy the raws.]

[TLN: As I was translating this chapter, THE CHAPTERS UNDERGONE MITOSIS AND 7 MORE CHAPTERS CAME OUT, YAY! ill go cry now. Anyways massive thanks to Spynine01 for editing this, make sure to show your love in the comments or discord. Also about the light novel, I’ll host a poll about whether you guys want me to pick it up or not, or maybe just have people join the discord and yell at me about it in general.]

[EDN: Now I’m not sure if dead will remember to put the cover down below, but the light novel is now officially out with the illustrations already out there. If you do want to see the illustrations, you can join the NeoSekai discord and you can view them for a hefty amount no money at all!] [TLN: This is a lie btw! I remember most of the time….I think]

Comments for chapter "Chapter 71: I Knew My Favourite Heroine Is The Best"

She Was Actually My Stepsister. ~Recently, The Sense Of Distance Between Me And My New Stepbrother Is Incredibly Close~