The next day at lunchtime. I wanted to invite Sasaki-kun and his friends to lunch, but I wasn’t in the mood to do so.

The reason being that Ruri was absent from school today.

“…I guess it’s dragging on after all.”

Sitting on the stairs leading to the rooftop, I was eating yakisoba bread I had bought at the store alone.

Yesterday, Ruri told me she hated me, and I thought I was over it…

As I was sadly chewing on my yakisoba bread, I heard my name called from the bottom of the stairs.

I looked down and saw Kiritani-sensei looking at me curiously.

Kiritani-sensei displayed a convenience store lunch box to me.

Next he came up the stairs and sat down next to me.

“Sensei, do you always eat here?”

Saying this, Kiritani-sensei showed me the key to the rooftop.

In principle, the rooftop was off-limits to students, but faculty members were allowed to use it only under special circumstances.

“You’re okay with me using your rooftop for private use?’

“It’s called an unspoken agreement. Other teachers also use it for relaxation.”

Perhaps it was because I had seen that movie, but I felt that his smile was somewhat similar to Nanase’s.

“Kenji-kun, why are you eating lunch here?”

“Umm… I’m just in the mood to eat here today in peace and quiet.”

When I responded, Kiritani-sensei stared at me.

I felt awkward for some reason and looked away from him.

Kiritani-sensei asked in a worried voice.

Is he an esper? He’s so sensitive to other people’s feelings that I can’t help but think so.

I told him that I hadn’t been able to talk to Ruri already, and he had a right to know how things ended between me and her.

“So that’s what happened…”

When Kiritani-sensei finished listening, he turned his face down and looked sad.

There were not many teachers who would grieve like this for their students just because they had a hard time. At least among all the teachers I have met, Kiritani-sensei was the only one who cared this much about his students.

“But that’s okay. I come to school and I’m doing my best in my club activities, and recently I made some friends… Kind of? Anyway, I’m enjoying school.”

I’ve grown tremendously since the days when I was in a state of depression and this was all thanks to Kiritani-sensei.

“I will continue to do my best in this way, as myself.”

I declared to Kiritani-sensei, as if to tell him that I’m okay.

I was sure he would be pleased.

I thought so, but… he looked a little sad.

“When Nanase and I went to high school together, no matter what happened to us, she always tried to be herself. That made me want to live like her, too…”

I was a little confused by him, but he continued in a gentle manner.

“I know this may be selfish of me, but I would like Kenji-kun to live like that too.”

“That… I do too. So every day, I work hard at club activities, talk to my classmates, and—”

“Are you sure you and Aima-san want to continue like this?”

I was at a bit of a loss for an answer.

“I don’t like it either. …but there’s nothing I can do about it. She said she hated me, and rejected my existence…”

I can’t say that I don’t think so.

But at least I couldn’t believe that everything Ruri had said to me last night was true.

“Kenji-kun, will you listen to me?”

When I turned my head, he had a serious expression on his face.

“…Kiritani-sensei, what do you mean?”

When I asked him what he meant, he began to speak.

It was the day of the high school entrance ceremony.

On the day of the high school entrance ceremony, while he was greeting the students in his class, there were two students who were on his mind. It was me who was absent and the other was Ruri.

While Kiritani-sensei was greeting the students and his classmates were introducing themselves, Ruri was glancing at the seat next to hers — my seat.

This continued even after the entrance ceremony was over.

When Kiritani-sensei looked into the classroom after school, he found Ruri wiping the dust off my seat, which had not been used for a long time and was covered with dust. 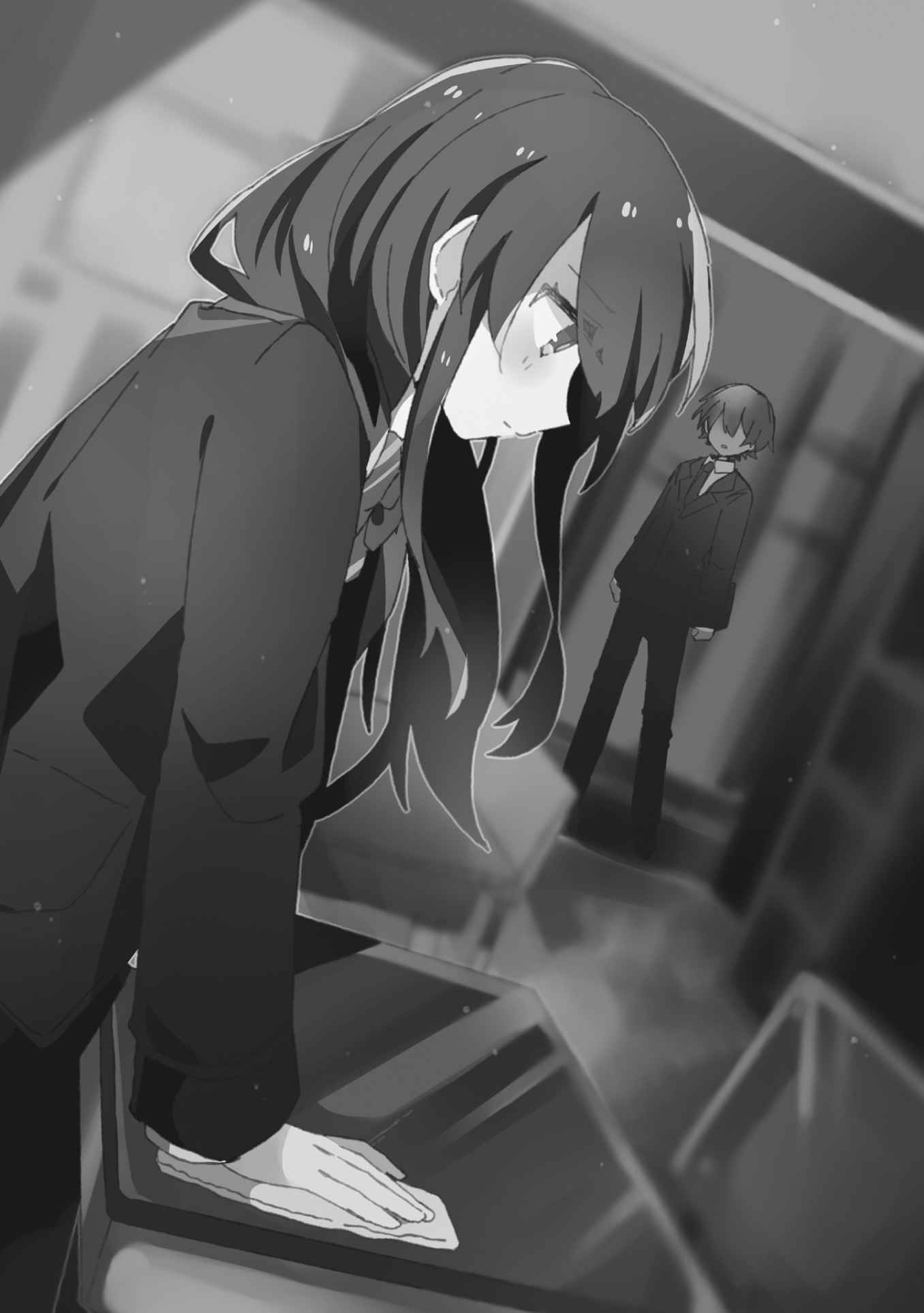 And the day after Kiritani-sensei’s first visit to my house.

Ruri came all the way to the staff room first thing in the morning to ask him.

Whatever it was, she happened to hear from another teacher that Kiritani-sensei was going to meet me the day before.

Since then, whenever Kiritani-sensei visited my house, Ruri would always ask how I was doing.

Every time he would reply, “he was fine,” or “he seemed to be enjoying playing games,” and Ruri would pat her chest in relief.

In response to my remark, Kiritani-sensei replied, “Yeah.”

“Do you think she really hates Kenji-kun?”

I thought seriously about his question.

With what I heard from the Kudo siblings and what I just heard from Kiritani-sensei.

Ruri must have done a lot for me without my knowledge

When I thought about it, there was only one answer.

As I was muttering my doubts, Kiritani-sensei tapped me on the shoulder.

“…But I don’t think Ruri will talk to me anymore.”

“Still, let’s do something about it and try your best to talk to her.”

“Sensei, why are you going this far…?”

“That’s because, after seeing what happened to Kenji-kun and Aima-san, as a teacher I couldn’t just let you two go on like this.”

“You two are both very good students”, Kiritani-sensei continued.

This teacher was really a good teacher all the way around.

Encouraged by Kiritani-sensei, I made up my mind.

I decided to give it one more try.

When I answered, Kiritani-sensei looked happy.

All right. I’ve decided, let’s talk to Ruri the next time she comes to school.

“Kiritani-sensei really has a heart for your students.”

“I don’t think so. There are many other teachers who do the same.”

Kiritani-sensei was humble as usual.

This may have been one of the reasons why I could trust him.

“I just want Kenji-kun and Soma-san to have no regrets.”

“Yes. I think I told you this once. On the day of my high school graduation I decided to stop my confession to Nanase and support her dream. But I don’t regret that choice at all.”

Kiritani-sensei turned to me and smiled as he spoke.

“Because it was a decision I made myself with Nanase in mind.”

Can I say with such a clear expression that I don’t regret not confessing to the person I love? At least I don’t think I can.

“I want Kenji-kun and Soma-san to make a choice that they won’t regret. That will surely lead you to live as yourself.”

Kiritani-sensei told me slowly and carefully, as if to indicate that it was important.

He then stood up with his lunch box, which had been left over a bit because of his talking.

“That’s all I wanted to say. Lunch break is almost over and I have to get back.”

I thanked him from the bottom of my heart.

This teacher has really helped me a lot.

That was why I really wanted to say something to Kiritani-sensei after hearing what he just said.

“Um, can I tell you something, Sensei…?

Kiritani-sensei asked in a curious tone.

I want him to know that I am there for him—

“I’m sure that Kiritani-sensei will be able to see Nanase-san again!”

The moment he heard my words, his eyes widened in surprise.

“She lives across the sea now, so it may be difficult, but I’m sure… that Kiritani-sensei will see her again!”

Kiritani-sensei said he had no regrets about not confessing to Nanase-san, and I believe he must be telling the truth. Besides, when we talked before, Kiritani-sensei didn’t seem to have any intention to meet with her in the future because it would disturb Nanase-san.

As his student, I want his love to be rewarded.

Because he is such a wonderful teacher.

Kiritani-sensei smiled again after he thanked me.

And that… was the coolest smile I’ve ever seen.