The day after Kiritani-sensei visited. I played a game with Marumaru before he arrived.

…No, I certainly don’t think it was a good idea to keep things as it was, okay?

But I like games in general… so I tend to get caught up in them.

Marumaru called me while we were playing together. The game, by the way, was a trendy shooting battle royale game that we played yesterday as well.

“Did something good happen?”

“Because you are playing really well today.”

Just as Marumaru said, my gameplay was in top condition.

“You had more than ten kills in three straight games.”

“I doubt it… maybe you got a girlfriend?”

“Ah, sorry. I was concentrating on playing and wasn’t listening.”

“R-Right! There’s no way Kinu can have a girlfriend!”

Marumaru went out of his way to repeat what I said. I mean, don’t you have some kind of follow-up or something?

“I can’t even talk to anyone outside of my family, let alone a girlfriend. Marumaru probably is as far as it goes.”

“Oh! Kinu should be thankful to me!”

“That doesn’t feel sincere at all.”

When I thanked him appropriately, Marrmaru made a disgruntled sound.

…I’m too embarrassed to tell him, but I’m really thankful to Marumaru.

It was the time when I stopped going to school and my hatred for Touya and Ruri was at its strongest.

I still thought of Touya as my best friend, and I still had feelings for Ruri. My feelings were completely messed up, and the one I hated the most was myself…

When I didn’t know what to do anymore, Marumaru helped me.

The reason I got to know him was that I started playing games to pass the time.

Every day, as I immersed myself in the game to avoid thinking about anything else, I got better and better at playing, so I put up clips (short videos) of my games on social networking sites to try it out.

…But it didn’t get any popularity, and I was thinking, well, whatever, when suddenly I received a message from an account I didn’t know.

“KN-san, I saw your video! You are very good! Wanna play together?”

It was Marumaru who sent me this message.

Marumaru was a bit of a disappointing person who, like me, posted clips on social networking sites… but his gameplay was much better than mine, but he never got any popularity.

…I declined the offer from Marumaru at first.

At the time, I was kind of reluctant to play games with someone I didn’t even know, and I didn’t want to interact with someone who may be abusive…

So I politely declined Marumaru’s invitation, but to my surprise, he sent me another message the day after I declined.

“I really want to hang out with you, KN-san!”

Naturally, I turned that down, too…

I kept refusing, but he kept asking me over and over again.

This guy was too persistent!

So finally I was convinced by Marumaru and decided to play a game with him just once.

Playing games with someone else was much more fun than playing alone, and for that one time, I naturally forgot about Touya and Ruri.

Since then, I have been playing games with Marumaru frequently.

“But today’s Kinu is still in good condition. Did something good happen?”

Why does this guy have such good instincts? Even though I’ve only known him for almost a year, he knows me so well that it was sickening.

Maybe this kind of thing was the reason we have been able to play together for so long.

I told him about my high school homeroom teacher — Kiritani-sensei — who visited me yesterday.

In high school, Kiritani-san was a shut-in, just like I was now, but a girl in his class changed him.

He was really trying to help me by telling me about those experiences.

When I told Marumaru everything that happened yesterday, including those things, he said.

“You have a good teacher!”

“And based on the way you are phrasing it, you also think he is a good teacher~”

Marumaru said in a tone of voice as he knew everything.

“The day is near when Kinu will go to school.” 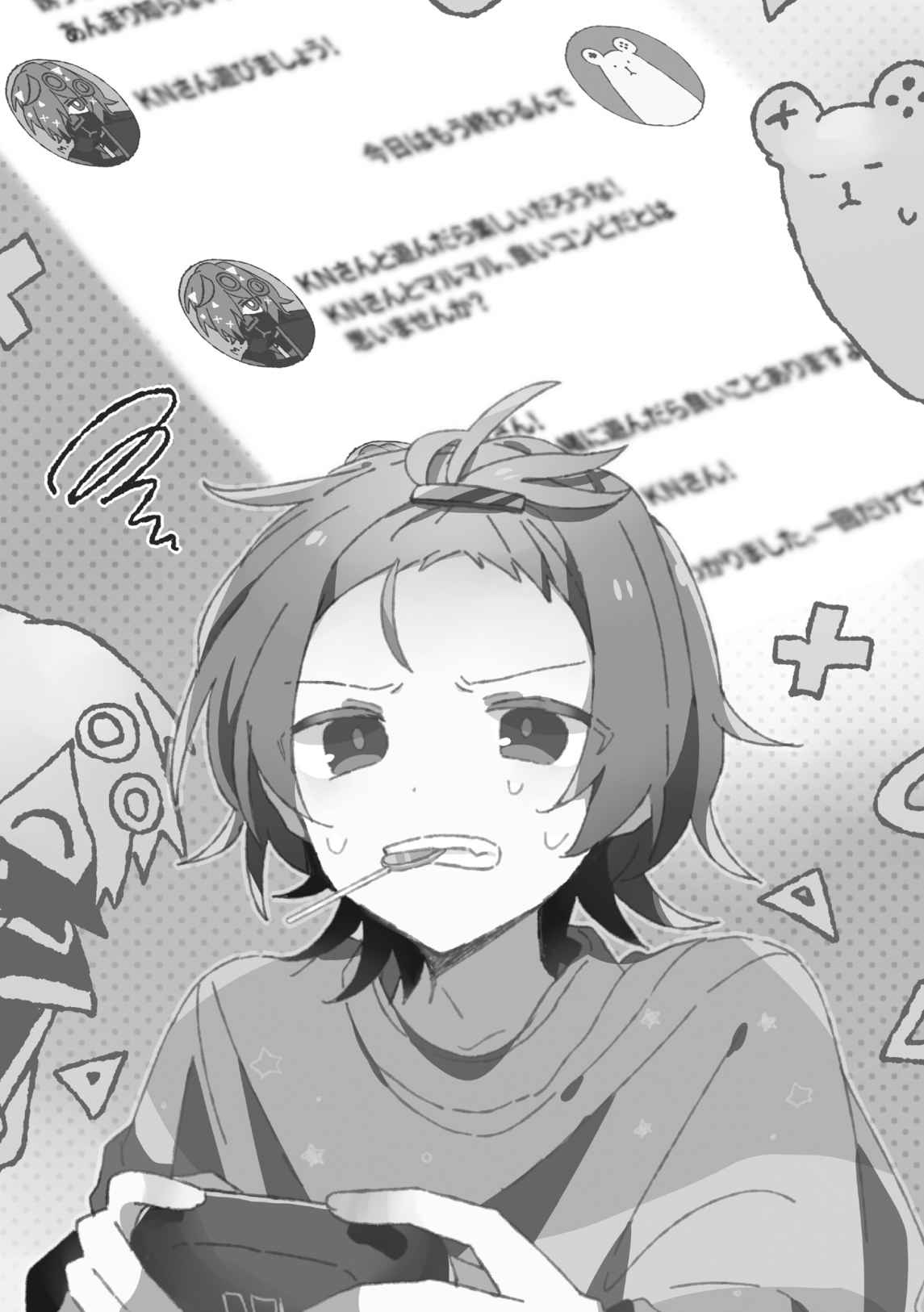 Kiritani-sensei said that remaining as a shut-in wasn’t necessarily a bad thing in itself.

Whether or not I would attend school was totally up in the air.

“It’s fun… How old are you to begin with? Are you in school right now?”

I don’t know anything about MARUMARU, or rather, every time I asked him, he evaded my questions. I trusted him and told him that I was a high school student, but I still tried to hide the specifics from him as much as possible.

“Hey, couldn’t you at least tell me that?”

I asked, and Marumaru pondered, then said.

He said it so mischievously. …This guy was still endlessly annoying.

[EDN: Sorry for the month-long delay, Char has been done with this for a while now but I was busy graduating and working on other projects. Don’t expect constant updates just yet, but hopefully will be shorter than another month.]