As soon as I left the staff room, I called out to Charlotte-san, who was standing next to me.

With those words, I meant to convey the message, “Are you really going to my house?”―

―But Charlotte-san didn’t seem to get the message.

Charlotte-san looked up at me with a kind smile on her face.

Am I dreaming right now?

I can’t believe that I’m about to go home with a beautiful girl who just came to study abroad today, it’s just so unrealistic.

As I looked at Charlotte-san, Emma-chan tugged at the hem of my clothes.

When I looked at her, she opened her arms wide.

From the familiar actions, I knew what Emma-chan was asking for.

I don’t know if she doesn’t like to walk while feeling sleepy or if she likes to be carried, but it takes a lot of courage for me to carry her right in front of her sister…

Charlotte-san nodded her head in rejection.

Charlotte-san bent down to meet Emma-chan’s gaze and tried to gently remind her.

I couldn’t help but be drawn in by this smiling scene.

But Emma-chan was not convinced, and after shaking her head, she looked at me again.

Her eyes were watery, and it looked as if she was appealing to me to “take me in your arms.”

I think anyone would want to spoil a little girl with an expression like this.

“Charlotte-san, it’s okay, Emma-chan is light, so she won’t be a burden, and I’ll carry her. Well, of course, if you don’t like the idea of your sister being carried by a man, I won’t do it…”

“Oh, no! That’s not what I meant! It’s just that I’m sorry to cause Aoyagi-kun any more trouble…”

“I’ll be fine. Besides, I’m sure we’ll get home faster if I carry Emma-chan in my arms.”

If I had to keep up with Emma-chan’s steps, I would inevitably arrive home later than I wanted.

Normally, I would be fine with that, but since Emma-chan would have used up a lot of energy today because she got lost, I thought it would be better for her to go home early and get some rest.

With that in mind, Charlotte-san wondered what to do, and then asked me to hold Emma-chan because she didn’t think her sister would listen to her.

When I gave her a hug, Emma-chan sounded very happy.

It seemed that Emma-Chan liked to be held in my arms after all.

“I’m sorry, Aoyagi-kun… but I’ll make sure Emma knows exactly what to do when we get home.”

Charlotte-san, who heard my words, smiled gently at me for some reason.

I was rather happy to be pampered by the lovely Emma-chan, but judging from her reaction, she might have thought I was trying to be considerate.

『Mouu~… you guys, I don’t know what you’re talking about…』

Emma-chan, who was in my arms, was sulking with her cheeks puffed out.

Since she was still very young, she couldn’t understand our conversation in Japanese, and she felt alienated.

『I’m sorry. From now on, I will speak to you in English.』

Not wanting to be left out, I apologized to Emma-chan and decided to speak in English.

Charlotte-san, trying not to make Emma-chan feel like an outcast, started speaking in English as I did.

She is a native English speaker, so she is probably more comfortable speaking this way, which is probably a good thing.

『No, I think your Japanese is much better than mine.』

『I don’t think so, I think Charlotte-san’s Japanese is much better than mine. Can I ask where you learned Japanese?』

It seemed like we were playing tug-of-war, so I responded with a question, and Charlotte-san looked a little unconvinced as she answered my question.

Charlotte-san, you were taught Japanese by your parents.

Could it be that they taught her Japanese with a ladylike tone in order to raise her to be a classy girl?

I can’t help but be curious, but I’ll hold back from going any further.

If I ask too much, she might not feel good about it.

I wondered if she understood what kind of language Japanese was, but since Charlotte-san was using it, I guessed she had a vague idea.

When I nodded, Emma-chan looked happy and pleased.

And then she rubbed her cheek against my chest.

As far as Japanese language is concerned, since their parents are teaching Charlotte-san, of course they will teach Emma-chan as well.

Besides, Charlotte-san seems to take good care of Emma-chan, and if she wants to learn Japanese, she will teach it to her.

And since this is Japan, Emma-chan will be able to speak naturally as she lives here.

So it is only a matter of time before Emma-chan learns to speak Japanese.

As I was thinking about this while staring at Emma-chan’s cute and sweet face, Charlotte-san looked at me and I called out to her.

Then she opened her mouth with a look of admiration on her face.

『No, I’m a little bit surprised that she really likes you so much…』

『No, Emma is a very picky girl, you know? At least, I’ve never seen her being pampered like this by anyone outside the family.』

That is very surprising.

She seemed to be a very pampered child and loved to be pampered, but was that really the case?

I was so curious that I couldn’t help but stare at Emma-chan.

Then, Emma-chan noticed that I was staring at her and turned her head.

She gave me a very cute smile and rested her face on my chest again.

She is a really cute girl.

She was so cute that I gently patted her head and she gave me an even cuter smile.

I just wanted to pamper her all the time.

『I wondered how on earth Emma came to adore you so much.』

『A cat video, you say…? It’s true that Emma loves cats, but I don’t think that’s enough to make her this attached to you so much…』

As I said, as an older sister, Charlotte-san began to think seriously about whether she was concerned that her younger sister was being too fond of me.

And then― she flashed a cute smile.

I was so struck by Charlotte-san’s beautiful smile that I asked her unintentionally, shaking my head.

『It’s most likely reason the why Emma adores you. In fact, Aoyagi-kun is a very kind person.』

When I tilted my head and asked again, Charlotte-san nodded her head with a very cute smile on her face.

To be honest, I don’t really understand myself when people say I’m kind.

However, she seemed to think highly of me.

That made me very happy.

―Then the three of us headed back to my place, chatting.

Charlotte-san smiled happily as we talked about trivial things that had happened at school, and Emma-chan seemed to be in a good mood as she swayed her body.

Even though I had just met them for the first time today, I felt very comfortable being with them.

I felt as if I wanted to stay with them forever.

We were supposed to be having a good time talking just a few minutes ago, but suddenly Charlotte-san has moved away from me.

I wonder what’s going on…?

Charlotte-san tried to distance herself from me even more, even though she said she had no reason to do so.

What should I do, my mental strength is rapidly being drained.

If Charlotte-san doesn’t like me, I normally can’t get back on my feet, but did I say something in our conversation that might have offended her…?

I said this with a depressed look on my face, and Charlotte-san looked very troubled.

She really is a sweet girl to be so considerate of me even though I am someone she doesn’t like and has opened up her distance to.

And what am I supposed to do now that such a kind girl hates me?

『U-Umm… you may have misunderstood me… so I will say this… but I am not keeping my distance from you, Aoyagi-kun, because I don’t like you …?』

Charlotte-san, who heard my words, said so with a troubled smile, which naturally brings up the question.

Charlotte-san’s eyes wandered around in response to this direct question.

She seemed to be wondering whether to answer or not.

Charlotte-san’s gaze continued to wander, and then she put her hand over her mouth and opened her mouth in embarrassment.

『I just remembered that I was sweating from running around… Ha, I’m so embarrassed…』

Charlotte-san’s face turned bright red and she mumbled in a muffled voice.

―I was so embarrassed by the cuteness of the beautiful foreign transfer student that my thoughts stopped. 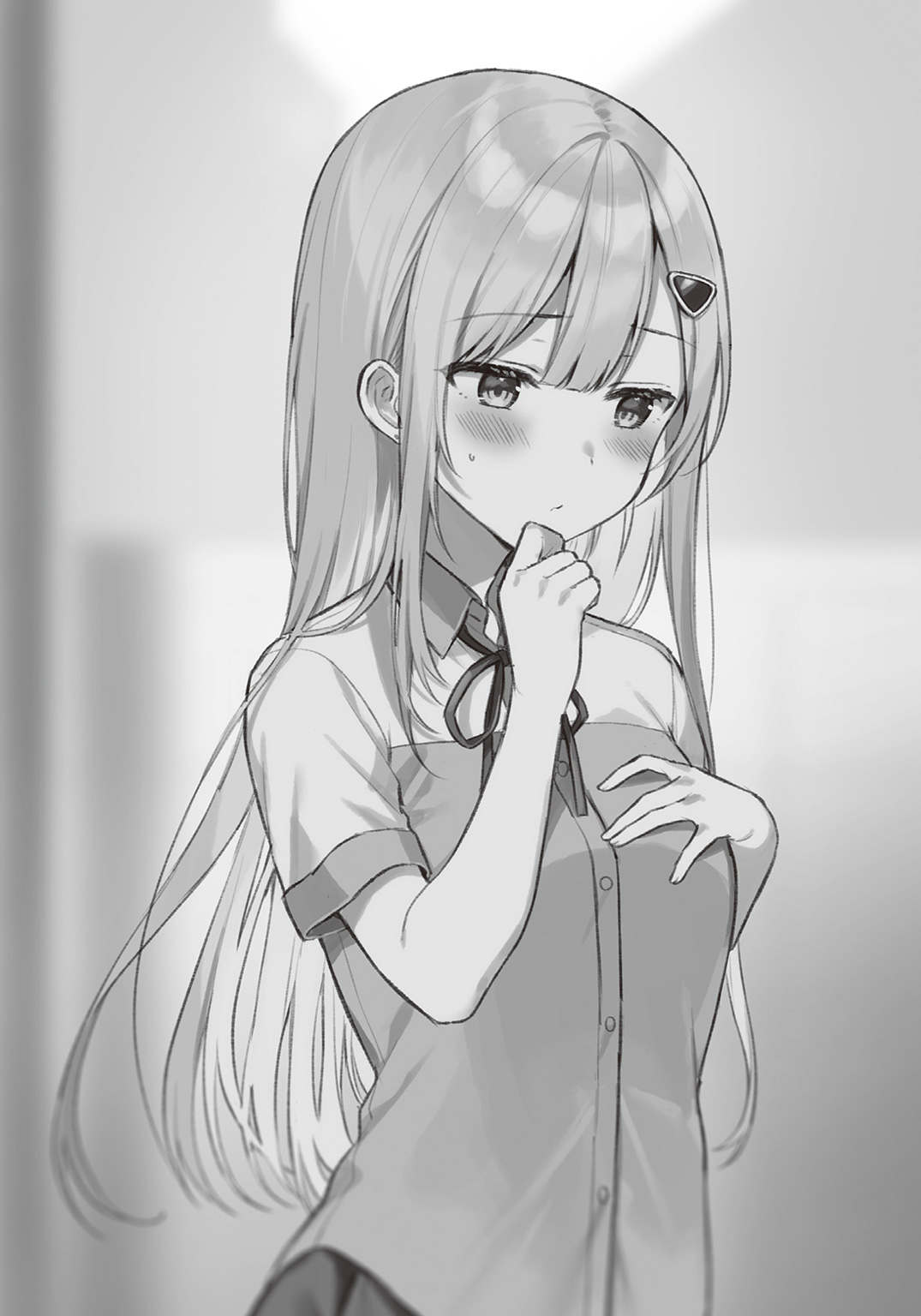 Translator’s Afterword: Sorry for not being able to upload for so long. I’ve been busy with a lot of things that’s why I was only able to release this today. Not to mention, this chapter is still unedited, so if you see any mistakes or corrections, just leave it in #feedback of our discord server or at the comments. Thanks for your understanding~

I Went Out With a Losing Heroine, But Before I knew It, My Childhood Friend, Who’s Supposed to be The Winning Heroine Thought We Were Dating, Got Angry and Went Into an Argument