After a fifteen minutes walk from the school gate, I suddenly heard the crying voice of a young child and saw a little girl around the corner.

From the looks of her, she must be about four or five years old.

From the words I heard, it seemed that she had gotten separated from someone named Lottie.

The adults around me just looked puzzled at the sight of a young child crying, and no one wanted to talk to her.

They just kept their distance and looked at the crying girl with concern.

I could guess why they didn’t speak to her from her appearance and the words she was shouting.

Her hair was silver, which is quite rare in Japan.

And the words she just cried out were not in Japanese, but in English.

She was definitely a child who grew up overseas.

I think it’s like everyone can’t speak English, so even if they wanted to help, they can’t call out to her.

…I don’t blame them.

I can’t just let this happen.

You can hope that someone who speaks English will walk by, but in the meantime, you’ll be giving this child a hard time waiting for the person she got separated from.

There’s no way I was going to let that happen.

“What’s wrong? Did you get separated from someone?”

I walked up to the girl and bent down to meet her eye level before speaking to her.

The girl freaked out for a moment at being called out, and then slowly looked up at me with woozy eyes.

Then― *ta-ta-ta*, she immediately hid behind a telephone pole. [TLN: ta-ta-ta = footsteps]

“I’m sorry for talking to you so suddenly.”

Since I was talking to a young child, I tried to keep my voice and tone as gentle as possible.

Then the little girl peeked out from behind the pole and looked me in the eyes.

I didn’t want to rush her, so I smiled back at her.

I guess it was a good thing, because the little girl peeked out a little more and opened her mouth.

“My name is Akihito. What’s your name?” 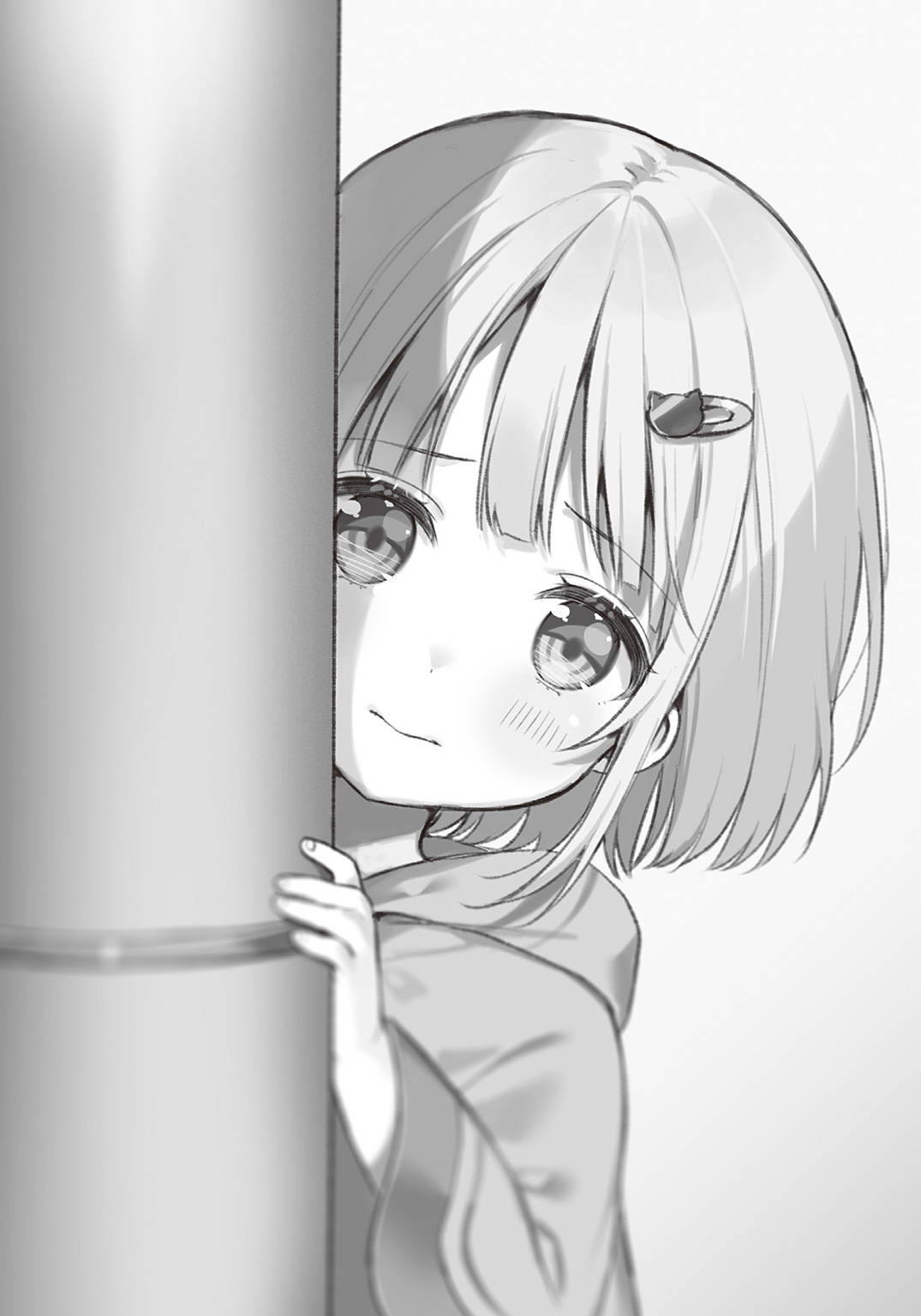 When I asked her name, the little girl stared into my eyes again.

Then, after looking around for a bit, she slowly opened her mouth.

“So your name is Emma-chan, right? Where did you and Lottie get separated?

“Oh, yeah, she’s not here. Where did you lose Lottie?”

As I was asking her questions, Emma-chan started crying again.

I don’t know why she started crying, but I don’t think she was able to communicate well because she’s still  young.

I know there is no one named Lottie around here, so I would like to know where she disappeared to…

In the meantime, I need to get her to stop crying.

I talked to her and she started crying again, which made people look at me suspiciously.

It seems that they didn’t understand what I was saying because we were speaking in English.

―What should I do?

What should I do to make her stop crying?

Unfortunately, I don’t have any sweets with me, as I don’t eat them very often.

Of course, I don’t have any toys that children would enjoy.

Other than that― oh, I have a smartphone.

I remember seeing a mother on the train once, handing her phone to her crying child to make the child stop crying.

I’m pretty sure she was showing the child a video at that time.

A video that a child would enjoy― this is it!

“Look Emma-chan, check this out.”

I opened a famous video site and selected a video that caught my eye. I slowly approached Emma-chan and showed her the screen of my phone so as not to startle her.

Emma-chan glanced at my face and then looked at the screen of my phone.

The moment she saw the video on my phone, her expression brightened up.

Emma-chan is glued to the video as if the tears that she was crying just a moment ago weren’t there.

Emma-chan takes the phone from my hand and smiles at me adorably.

I guess this will work for a little while.

I’d like to look for Lottie while Emma-chan is preoccupied with the video of a cat, but… I have zero leads, I guess.

I think the best thing to do is to take her to the police station, but if the policeman doesn’t speak English, she might feel uncomfortable.

She’s too young to be in such a situation.

I guess I’ll have to find her…

I don’t have any clues― but doesn’t this child look similar to someone else…?

And her pretty face is just like Charlotte-san, who just came to my class today.

I think I’ve read something like that in a novel that I’ve read once.

I’m pretty sure that Charlotte-san has a sister, based on what she said today.

“Emma-chan, can you tell me your full name?”

Emma-chan, who had been engrossed in the cat video, looked up and answered with a puzzled expression.

She tilted her head, which was a very cute gesture, and combined with her appearance, she looked like a very cute little animal.

I let out a sigh of relief as it seemed that she was no longer alarmed.

I think the best way to meet Lottie-san, the person Emma-chan is looking for, is to go back to school.

“Yes, maybe we’ll see her around.”

Emma-chan nodded happily when she realized that she could meet Lottie.

When I talked to her calmly, I realized that even though she’s  very young, she could still understand what I was saying, so maybe she’s a smart kid.

Suddenly, Emma-chan started to look around, and I tilted my head to look at her.

She looked at me for a moment with an anxious expression, and then looked at her open hand, which was not holding her phone.

She didn’t move for a few seconds, making me wonder what’s wrong with her.

I peered into Emma-chan’s face, being careful not to startle her.

Then, Emma-chan’s gaze turned towards me.

She nodded her head and looked as if she had made up her mind.

Just as I was wondering what she had decided, Emma-chan held out the hand she had been staring at to me.

When I asked her, Emma-chan nodded cheerfully.

Then she held out her hand while swaying it up and down a bit.

When Emma-chan asked me to hold our hands together, I was troubled.

In today’s society, the eyes of the world are becoming more and more strict, and walking together with a girl who doesn’t resemble your looks at all might lead to a poor misconception.

In case you’re wondering, I’m still wearing a school uniform, so I think it’s safe to say that I wouldn’t do anything that might cause a misunderstanding…

As I pondered this, Emma-chan’s eyes, which were staring at my face, began to moisten.

Then she gazed at me with a small animal-like expression, as if to appeal for something.

…Well, I’ll just hold my hand together with her, right?

I’ll stand out from the crowd because we’re walking together, and it’s safer to chain our hands together when cars are passing by…

Emma-chan smiled reassuringly and dropped her gaze to the cat video.

Maybe she was anxious and wanted to hold our hands together.

I was glad that we could hold our hands together and make her feel safe.

I turned back to the school, matching Emma-chan’s pace as I thought about this.

“Emma-chan, it’s dangerous to keep looking at cats. You need to look ahead where you’re going.”

As we were walking back to school, I called out to Emma-chan, who was walking hand in hand with me.

At first I tried to get her to give me my phone back, but when I tried to take it away, her eyes welled up and she looked like she was about to cry.

Apparently, she liked the cat video.

I had no choice but to leave my phone with her, but because of this, Emma-chan was walking around watching the video.

She would look up when I called out to her, but other than that, she was engrossed in the cat on her phone.

No matter how many times we chain our hands together, we’re bound to fall down at some point.

When I warned her, Emma-chan thought for a moment and looked up at me, opening her arms wide for some reason.

I can’t figure out what she wants, so I tilt my head back and stare at Emma-chan.

When she realized that her request was not being conveyed, Emma-chan begged me in a sweet voice.

Because of the height difference, Emma-chan looks up at me and her eyes well up.

I wondered if this was a good idea.

I’m interacting with a young child.

Normally, people around me would think that we were just a couple of close siblings, even if I was holding her in my arms.

But Emma-chan is a foreigner, so she looks nothing like me.

I wondered if it would be okay to carry her in my arms when I had so many hurdles to overcome just by connecting our hands together.

At first, I looked around to see what was going on.

Fortunately, no one was looking at us with quizzical eyes.

So I looked at Emma-chan again.

She looked like she was about to start crying.

I decided to take Emma-chan in my arms because I didn’t want her to cry again.

When I tried to carry her in my arms, I found out that Emma-chan was very light because she was so young.

This would not be too much of a burden to carry her to school.

As I walked along with her in my arms, a happy Emma-chan cheeked me happily.

She must be at an age where she wants to be pampered.

While listening to Emma-chan’s happy voice and the cat’s purring from my phone, I headed back to school.

For Some Reason, My Little Sister’s Friend, Who Is Totally Devoted To Me And Has The Highest Liking For Me, Has Decided To Stay With Me While My Parents Are On A Business Trip And My Little Sister Is On An Excursion For Club Activities, So It’s Just The Two Of Us

I (30), Who Works for a Black Company and Died While Regretting My Gloomy Life, Started Over From High School!