For Some Reason, A Gal In My Class Became Friends With My Step-sister. - ■V2 Chapter 1 ◆Part 7【Restart】

◆Part７【Don’t Make That Kind of Face, That Face Is…】

After school, Yua was supposed to come to the Nagumo house.

I had arrived home before her, and received a message from MINE saying, “Shinji, lock the door.”

I wondered why I had to lock the door since I was at home, but Yua never listens to me once I say so. I do as I’m told and wait on the living room sofa.

Yua comes into the living room with a smug look on her face, holding a duplicate key in her hand as if to show it off.

“Are you that happy to have a duplicate key?”

Yua, who is in a good mood, shoves the key, right in its necklace, down into her cleavage.

Although we had to go through the trouble, it was worth it to give her the duplicate key if she was happy.

Yua is not only a guest at Nagumo’s house, but now, she’s like a member of the family.

Yua, who was supposed to be a guest, was in charge of making the dinner tonight.

I can do all the housework myself, but Yua is a better cook than I am. I feel a bit uncomfortable because Tsumugi is so happy when Yua is on the duty of making dinner.

We were sitting down to dinner without Dad, who was currently playing a match at the K-parakuen Hall in S-dobashi. The three of us used to live in different households, but now we all seem to be a part of the Nagumo family.

It has also become a routine for me to drop Yua off at the train station.

There was no security problem in our area, but I still felt bad about sending her home alone at night after she had prepared a delightful dinner for me. I had no choice but to drop her off.

Oh, it was not because I wanted to spend some time alone with Yua, or for some other indulgent reason. [TLN: Copium.] [ED/N: Classic tsunder boys.]

At this time of the day when we walk together on a quiet night street, we talk about what happened at school that day. Before we knew it, we had begun to do this.

Well, today, as usual, we had conversations not only during lunch break but also during PE class, including the accidents, so I thought there would not be much to talk about.

“But still, I wanted to see Shinji’s face.”

Yua stopped and looked up at me.

“…You still haven’t given up on that?”

I thought the conversation had ended during the day, and Yua hadn’t rehashed it since then, so I thought she had enough of it.

“Because I wouldn’t want someone else to see it before I know it, would I?”

“It’s nothing special, and my bangs don’t cover my whole face, so my real face won’t be that different, okay?”

“If that’s how you feel, then maybe you shouldn’t be so reluctant.”

Yua is right, if you continue to refuse too much, it will seem as if you are pouting. It might make you look like you think your true face is a big deal.

I took a leap of faith and lifted my bangs in front of Yua.

Perhaps it was because my hair, which usually grew close to my eyes, was no longer in the way, but I felt as if my field of vision was much more open, and I even felt a sense of liberation.

Yua stared at me with a truly amused look on her face, despite her boring reply.

“Shinji has a nice face when you look at it closely. I like it.”

I covered my face with my hands.

“Besides, even Yua was worried about me seeing you without makeup, remember?”

When Yua came to stay at our house before, she was worried about being seen with her bare face. In the end, she still had a nice face, just a little younger looking, regardless of whether or not she was wearing a “skinless” face.

“It’s all good now~. I can show Shinji my face anytime.”

“Shinji said it was all right after all.”

With Yua smiling at me, I reached the point where I could no longer continue to face her.

“Come on, get out of here before it gets too late. You’ll miss the last train if you keep on wasting time.”

I walked ahead of Yua.

Yua, who sounded not disappointed but rather excited, followed me and hugged me in her arms.

I was so happy to receive compliments from Yua that it made my skin crawl, but I still didn’t want her to touch my face too much.

If we had really been lovers, would I have accepted Yua’s evaluation?

I still could not understand Yua’s true intentions.

There must be a special reason for Yua’s closeness to me.

Our relationship would not exist without Tsumugi.

Without Tsumugi, there would be no connection between me, the shy guy, and Yua, the sunny gal.

Ousaki doesn’t know why her best friend Yua made me her “boyfriend.”

I think Ousaki’s question is valid. She doesn’t know that we are connected by our love for Tsumugi.

Not because of Ousaki’s pestering, but because lately I’ve been wondering about Yua’s true feelings.

However, I am comfortable with the way things are now, so I am not inclined to make any changes.

Translator’s Afterword: Just like in my other series that some of you guys may have read, I saw this Facebook post and felt happy. Thank you to whoever this person is as it made both me, and Matsu’s day better. Glad to know people appreciate our work!

Also, this is the last part for Chapter 1. 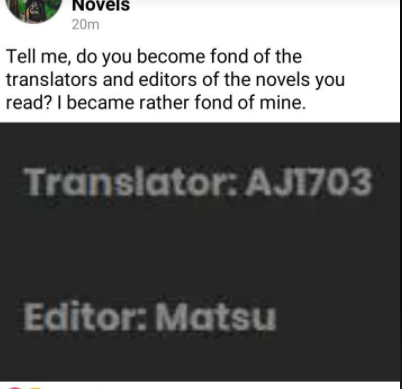 Taking care of my younger sister’s too naive of a beautiful yankee high schooler, then falling in love