For Some Reason, A Gal In My Class Became Friends With My Step-sister. - V1 Ch-4.5 Epilogue

It was a holiday, and although it was a weekday, there was no school.

I was home alone.

Tsumugi had gone out to hang out with her school friends, Yua hadn’t come to our house because she was going to hang around town with Ousaki and the others, and my father had left for his tour of the country again, so here I was.

But that doesn’t mean I have too much time on my hands, I have my studies to do and my daily chores to do.

It was a normal day, but I felt somewhat inadequate as I went about my studies and work.

Just as I was about to finish cooking dinner, Tsumugi came home.

After getting dressed in her room, Tsumugi padded over to the kitchen and looked at me strangely.

“No. I think she’s hanging out with her friends today.”

“Then why do you have one more fish?”

It was only when Tsumugi pointed it out to me that I realized that I had burned the salmon fillet for Yua. By the way, the rice I cooked was for three people.

“Shin-nii~, if you’re so conscious of her, you’ll have to marry her, won’t you?”

Tsumugi grabbed my hand and twirled it around, almost dancing on the spot.

I guess Tsumugi really wants Yua to be her sister.

“Tsumugi’s been taking a lot of leaps of faith lately.”

I shook off my embarrassment and waved the frying pan with the vigor of a seasoned Chinese chef.

Tsumugi and I had dinner together.

There was nothing in particular that I wanted to watch, but as usual, I left the TV on.

As I was absentmindedly watching a variety show with popular comedians and celebrities taking on the outdoors, I heard a breaking news message.

It said that the perpetrator of a crime that had occurred in a place completely unrelated to the city I live in had been arrested.

Normally, I would have casually skimmed over it, but I felt restless, worrying about Yua, who was not here today.

I could have contacted her through MINE, but it would have been annoying to send her a message when she was hanging out with her friends, and it would have been too embarrassing to say, “I was worried about Yua because of some totally unrelated news.”

“Shin-nii, I know you’re lonely. After all, Yua-san’s not here today, right?”

“Isn’t this a pattern that the next time Yua-san comes, you won’t be able to stop at just kissing her?”

“There’s no such pattern, and you should stop imagining things like that.”

Tsumugi said with such a nonchalant look on her face that I felt like I was the only one who was embarrassed.

After dinner, we were washing the dishes when the intercom rang.

I saw the person on the monitor and headed for the door, wondering what it was at this hour.

“Shin-nii is in a very good mood… Shin-nii, I’m glad your request went through.”

Tsumugi, who was sitting on the sofa playing with her phone, said, but I didn’t know what she meant.

I unlocked the door and opened it to find Yua standing there.

When I saw Yua’s unchanged appearance, I felt my impatience dissipate.

“You have a key, so why don’t you just open it and come in yourself?”

“I’m not smiling! Don’t say something without basis!”

I didn’t feel any stimulation in my facial muscles, but my voice was so lively that I knew it was coming from me. This is embarrassing…

“I forgot something, so I came over.”

I thought it was a strange thing to happen, but since Yua comes to our house so often, it’s not surprising that she forgot some personal items.

I don’t know what she’s looking for, but it must be something very important, because she came all the way to my house to get it even after hanging out with her friends.

“Don’t just stand there, come in. What did you forget? I can help you if you wa─”

Before I could even finish my sentence, I was caught head-on by both of Yua’s arms.

I was at a loss for words.

Yua only pressed her nose against my chest, but said nothing.

It’s summer and it’s humid, so when Yua is wearing just a thin black sweatshirt and I’m wearing just a t-shirt, we’re so close to each other that our combined body heat almost blurs the boundaries between us. I felt closer to Yua, and my heart started to pump harder.

Yua pulled away from me with a slight blush on her face.

“You were depressed because I wasn’t here, weren’t you?”

“Tsumugi-chan took the trouble to send me a MINE message and told me that Shinji was feeling really lonely.”

Tsumugi, that girl… she was fiddling with her phone a lot, and even told her that…

“When I imagined Shinji like that, I got all excited and wanted to see you, so I flew over here.”

“That’s nice of you. So, did you forget something?”

At the same time, Yua walked out with her golden hair flowing.

Could it be that Yua was also regretting not seeing me?

I told Tsumugi in the living room to lock the door because I was going out for a while, and then I went to get my bike.

Although the area around our house was safe, I didn’t feel comfortable leaving Yua alone at any time. After all, she stands out from the crowd and can be a bit of a pushover in the wrong places.

Before my legs could heat up from pedaling my bike, I spotted Yua’s back.

Her long golden hair, now familiar to me, shone brightly in the bike’s lights.

Here, I am reminded intensely of the ‘forgot’ event earlier.

I could still feel Yua’s touch on my body, and there was a good chance that I would get embarrassingly flustered or blush in front of her. It seems that every time I touch Yua, I get a fresh stimulation. It seems I’m still a long way from reaching the point where I can casually touch a girl’s body like a riajuu. 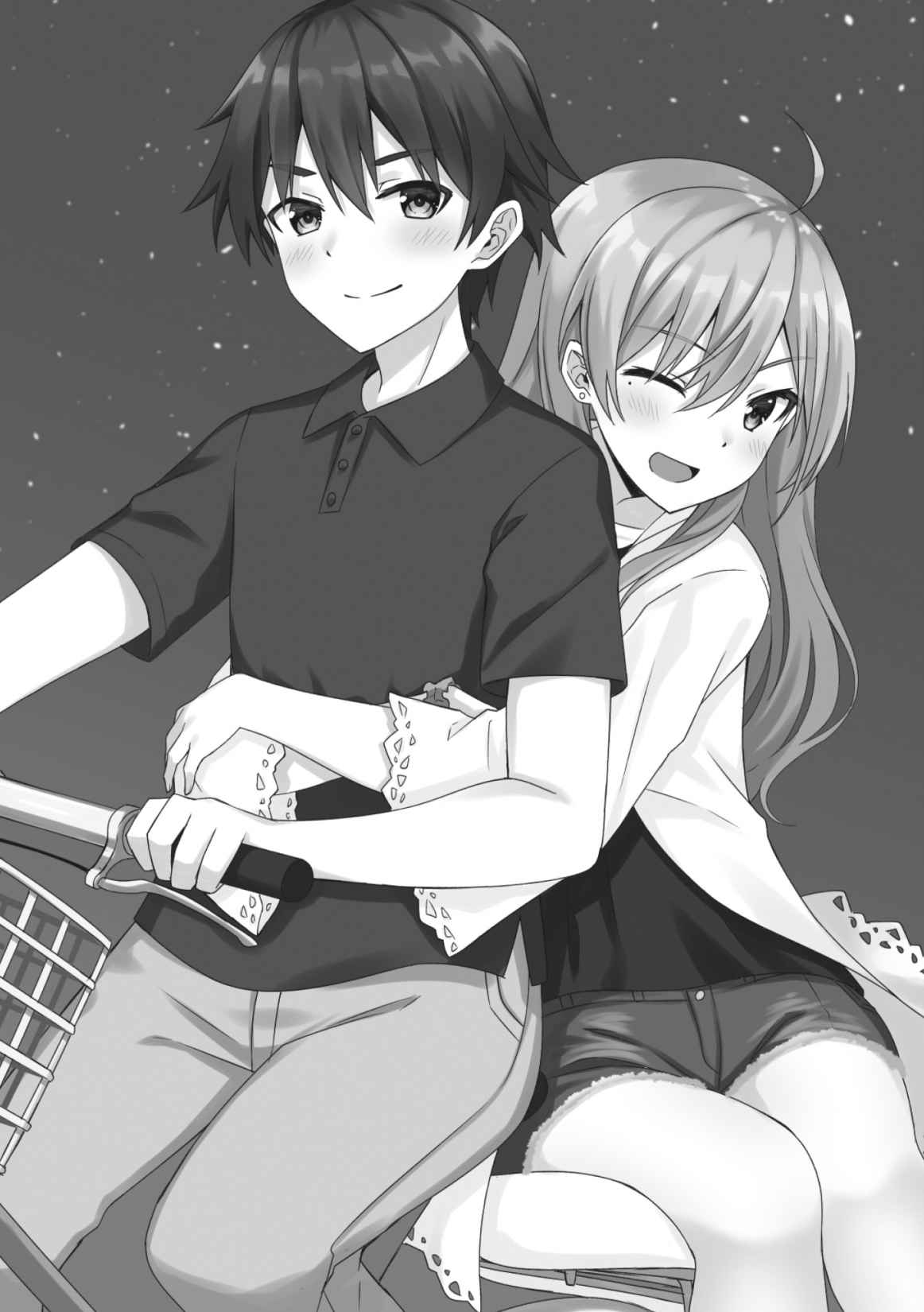 And yet, I still wanted to.

I wanted to talk to Yua a little more, even if it meant exposing my uncool appearance.

As Yua’s back slowly approached, I thought about what to say.

She smiled at me with such conviction that it was as if she knew I was coming, and I felt foolish for racking my brain for a topic.

As long as Yua is here, I might as well do whatever it takes.

Translator’s Afterword: With that, we have finally finished taking over volume 1. I enjoyed this series, and I heard that v2 would be coming out sometime during the winter. As long as I’m not busy, I’ll probably be able to work on it immediately as soon as it comes out! If you guys enjoyed this series, please do consider donating and helping me reach the laptop goal which I would be using for both my studies and translations. At night, my father usually takes over the PC and I don’t get to translate anymore. I want to at least get a bit of work done at night when that happens but it’s not possible without a second PC. I tried using my phone but it was quite hard, and I won’t try doing it ever again lol. Anyways, thanks for reading this series and I hope you all support the author by buying the book here.

Editor’s Afterword: This is our first time(?) translating a Light Novel and we hope that you’ve enjoyed it. Also, EPub/PDF download  soon? I’ll figure it out sometime in the future. Also, help AJ get his new lappy so that he can translate faster than ever before…and he could possibly play eroge longer than before. Either way, we’re probably gonna remove the afterwords on the PDF version of this LN so that It’ll feel more LN-like. That’s been Volume #1 of the Class Gal and prayers for Vol. 2 to come up early so that we can translate it ASAP.

Likewise, we hope that you’ve enjoyed reading this first Light Novel Translation from pepega duo of the NeoSekai Translation and always, thank you for supporting us and the author of the Class Gal!!

Music playing while writing this afterword: “Re:birth Day” by Roselia

For Some Reason, My Little Sister’s Friend, Who Is Totally Devoted To Me And Has The Highest Liking For Me, Has Decided To Stay With Me While My Parents Are On A Business Trip And My Little Sister Is On An Excursion For Club Activities, So It’s Just The Two Of Us