Is A Girlfriend Who Can't Say "I Love You" No Good? Houkage-san Reads Light Novels Too Much - Epilogue B — Iisaka Rin

Prev
Next
Hello fellow viewers, there has been reposting of our translations on different sites. We would like to make everyone aware that it was done without our permission.

“Hahahaha, that surely was a disaster.”

In the end, Hoka-chan was late for class and was berated by the teacher. I heard that the class was whispering to each other about what was going on with her.

“His sister didn’t like you, and she stopped you from going to class on time. It’s a shame.”

And now, it’s after school. We were in the literature club room.

I, Iisaka Rin of the manga club, am here to play today as well. The only difference is that my favorite opponent, Shake-sensei, is not here, and I’m facing Hoka instead.

I heard that Aramaki-kun was taken away by his sister under the guise of ‘buying an advance gift for Kaho’.

I was sympathetic to Hoka-chan, but I gently discouraged her.

“But, Hoka-chan, it’s not good. If you call Shake-sensei a convenient person, it won’t be funny for Hayuyun. She seems to be a bit of an uptight person, after all.

Hoka-chan’s eyebrows furrowed in a pale expression, and she made a troubled sound.

“But the fact is, Aramaki-kun is a man of convenience.”

“Ohhh… you’re so naive. Well, it’s true, Shake-sensei does seem to be the type to be devoted.”

Then she began to speak in a more livelier tone than ever.

“When I am trying to get something from a high place, he takes it without saying a word. When Aramaki stretches out his arms, he looks much taller than me, and I feel as if I’m completely covered, but strangely enough, I’m not afraid of it.

He would listen to me forever, even if others don’t. It’s not like he’s holding back from me, but he’s telling me what he thinks, what he analyzed, and he even smiles a little too. It’s convenient for me, too, because it makes my head tingle and I want to talk to him more.

When I asked him about the machine, he patiently and diligently taught me about it, even though I had a hard time understanding it. He seemed quite surprised when I called him from the bathroom, but he was not angry when I sent him the wrong picture and he helped me out too, which is very convenient.

When I compared them together, I noticed that he has very big hands. They are also much stronger than mine. When he grabbed me tightly, my muscles couldn’t resist, and it felt strange to feel someone else’s uncontrollable force directly inside my body, but strangely enough, I wanted him to grip me even more, to the point of pain, which was very convenient.

For a while, after we became acquaintances, he called me ‘Houkage-san,’ but when I asked him to use only my name, he hesitated for a long time before finally calling me ‘Houkage’. After that, whenever he called my name, his voice still sounded like he was a little embarrassed. In fact, I didn’t care about whatever he called me, but the way he breathed when he called me, and the way his mouth seemed to be somewhat trembling when the conversation was interrupted, it was somehow… comfortable and convenient. It’s very good.

In addition, after taking me to the coffee shop, he went to the trouble of buying a carton of milk from the deli to make coffee milk so that I could drink coffee from the coffee maker.”

Hoka noticed that I was lying on the table with my palm facing her, as I cut off her words. Her cheeks, usually pale, were pale pink from talking so much about him. 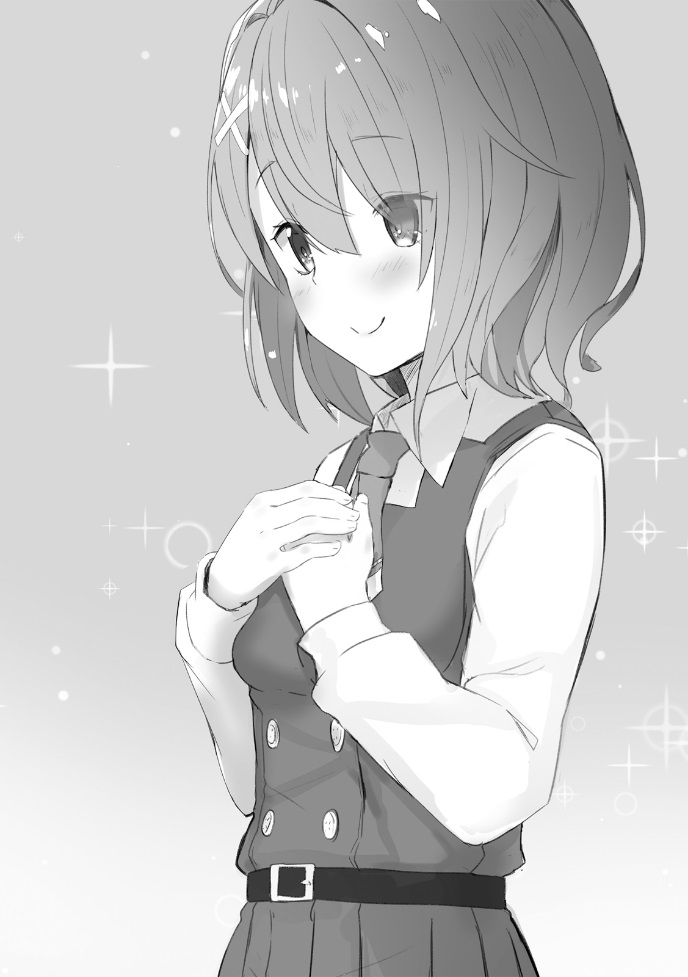 “Oh, yeah… I get it, so please stop. I’m going to die of sugar vomiting at this rate…”

HEY! …Just, please. I raised my body, exhausted by the pressure of love, and repositioned my glasses, which had shifted ever so slightly. Then I turned my eyes to Hoka-chan and spoke to her.

“—Hoka-chan. If you translate that as ‘I love him’, I think both Shake-sensei and Hayuyun will be very happy.”

Hoka-chan looked as if she had been caught off guard by my words. Her thinly opened lips opened and closed up a couple of times. She couldn’t breathe, so she couldn’t say it out loud, but the words seemed to bounce around inside her head.

Then she looked down at the light novel in her hand. It was the last volume of a romance light novel that I had recommended and lent to her.

As it was, she lifted the book with both hands and hid her face, which was stained with the colors of love.

“According to the light novels…

Mondenkind is no longer with you

She Was Actually My Stepsister. ~Recently, The Sense Of Distance Between Me And My New Stepbrother Is Incredibly Close~