I Know That After School, The Saint More Than Just Noble - Epilogue

The sound of wind chimes echoed through the neighborhood.

It was a hot and humid late summer night on the last day of summer vacation.

Yamato was standing by the window of his room, listening to the sound of the wind chimes, and was in a daze all by himself.

His cell phone rang, informing him of a new message.

When he checked, he found that the sender was Seira.

Yamato, seeing the text, sighed with a sense of both relief and dismay.

From the day of the fireworks display until the beginning of Obon, he and Seira worked part-time again, went to a nearby festival, and did homework together.

Tsubaki joined in on the festivities, and the three of them had a lot of fun together. She told him that her ballet performance had been going very well, and thanked him again.

However, these events seem to be in the distant past now.

After the Obon vacation, Yamato exchanged messages and phone calls with Seira, but it seemed that she could not return from the villa where her relatives had gathered, so they could not see each other until the last day.

There was also the option of having a videophone call, but he was too embarrassed to make one. It was Yamato’s fault in this case.

So, Yamato was very excited to finally be able to see her tomorrow at school.

First things first, he responded, “Welcome back, did you do your homework?” She replied, “Yes.”

“It was a long, long summer vacation…”

He collapsed on his bed and talked to himself.

Since the beginning of the Obon vacation period, Yamato had spent his time doing homework, working part-time, and occasionally hanging out with Eita and his friends.

These days were not so bad, but Yamato still had a smoldering desire to spend time with Seira in his heart.

To put it simply, he felt lonely.

But then, he received another message from Seira.

—After making excuses to himself, he replied, “Sure, where do we meet up?”

The reply came back immediately, “At the convenience store near Yamato’s house.”

“It’s so close. Is she there already?”

Muttering to himself, he changed into his casual clothes and ran out of the house.

He was in the mood for running rather than riding his bike, so he ran out into the night.

When Yamato arrived in front of the convenience store out of breath, he saw a beautiful girl in a white one-piece dress standing there with a luggage case in her hand. 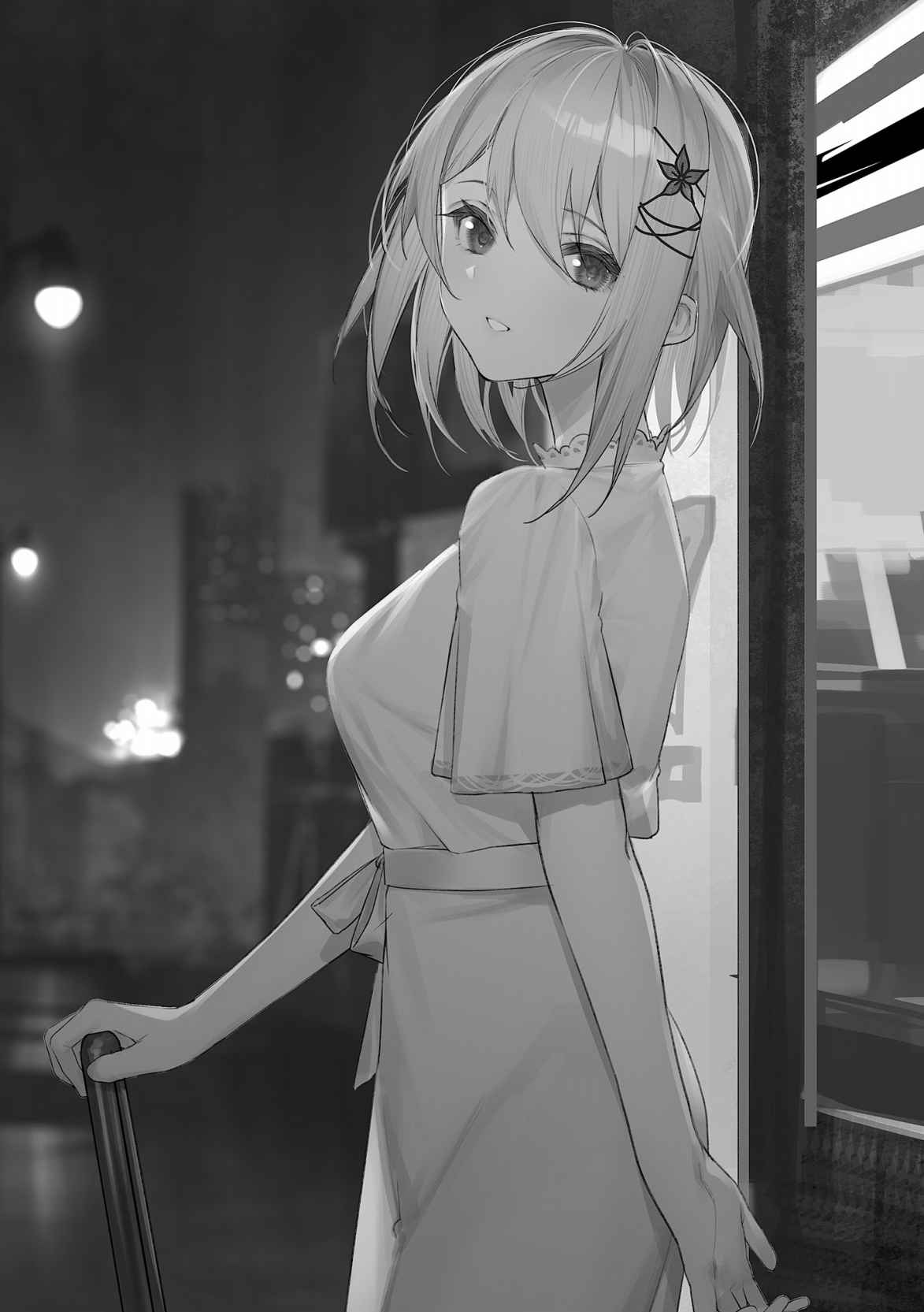 She looked very mature, perhaps because she was wearing red lipstick and clear makeup, but there was no doubt that the beautiful girl was Seira.

Seira greeted him with a gesture that was out of character to her mature appearance, and then came straight up to him.

“Hey, is that a part of the clothing you wanted to try again?”

“What’s that? It’s from my house’s instructions. I dressed according to them for the party today.”

Though she was smiling, she was obviously not in good spirits.

Yamato couldn’t help but feel uncomfortable when he saw her.

“I know it wouldn’t look good on a normal person, but because it’s Shirase, you look beautiful. But what’s with the white one-piece with red lipstick? It’s like a stage dress for a leading actress.”

Saying that, Seira moved even closer to him.

Then she put her forehead on Yamato’s shoulder.

Yamato was still excited because it had been a long time since they had seen each other, but Seira was clearly different from usual.

It wasn’t just because of the way she was dressed. She looked somewhat weak and vulnerable.

“Were you able to get your words through to your father?”

She replied ‘so-so’ on the phone earlier when I asked and I noticed the lack of energy in her reply.

These thoughts came to mind when Yamato looked at Seira in person.

However, it seemed like she didn’t want to elaborate on it, so he didn’t question her further.

Instead, Yamato opened his arms, about to embrace her, but decided against it and put his arms down.

After a while, Seira lifted her head off his shoulder.

Then she smiled gently and said,

“I’m all recharged. I can start working hard again tomorrow.”

“Are you sure you’re okay?”

“Yes, but I’m afraid I won’t be able to hang out with you for a while.”

Seira told Yamato, who was surprised by her sudden words, with a smile on her face.

With that, Seira simply left.

Yamato stood there, unable to follow her without understanding what she meant.

The words that finally came out of his mouth were so pathetic that he looked up at the night sky and sighed.