I started dating a cute girlfriend I met during my eighth grade days when we reunited in high school. - Chapter 16

I don’t know what triggered Eriko to visit our house, but I think it was when she was in elementary school, when her mother started working part-time and sometimes went to work at night, and my parents asked her to have dinner with us because they thought she would be lonely and alone in her house. I don’t think it’s possible to be lonely when you’re in high school now, but it’s something she’s been doing out of habit.

“Thank you for everything, Eriko-chan, your cooking skills are getting better and better.”

“No, no, it’s me who’s always happy to be included. I’m always glad to be involved, after all, it’s lonely cooking alone.”

“No, but you’ve really improved. At first, your gingerbread was like charcoal…”

I remember when she first came to my house, she used to annoy my mother with her need to help. My mother refused to help because it would be dangerous if she got hurt, but I guess she gave in and ended up cooking with her. I was watching fantasy anime at that time, of course. I was always fascinated by magic, and I still am.

“Yes, but you ate the charcoal-filled gingerbread with a look of disgust on your face, didn’t you?”

“Well, you made it for me. I couldn’t leave it behind, could I?”

I replied to Eriko, who was looking a little embarrassed. Seriously, it tasted like charcoal… Well, it’s burnt after all. But, if your childhood friend has worked hard to make it, but failed and looks like she is about to cry, you should eat it.

“You’re a pretty decent guy when you get past the “Chuunibyou” part… Well, if you lose that, you’re not Shinya…”

“Right? How about you come and marry him, Eriko-chan? I’d be happy to take you in.”

“It’s nice of you to say so, but Shinya already has a girlfriend. You haven’t told your parents about Sacchan?”

Eriko’s words made me choke up. Whoa, whoa, whoa, the rice I had swallowed is now in my windpipe. Some kind of organization is attacking me! My mom is looking at me with great interest. Please help me.

Ignoring my pleading eyes, Eriko continued to eat. I don’t know why I have to talk about love with my parents.

“She’s a beautiful, innocent girl. Shinya seduced a new student, and I was surprised to see them together the day after she transferred.”

I’ve got nothing but enemies!! Why is my mother getting so excited!? After finishing my meal, I decided to take refuge in my room.

Eriko knocks on my door and comes to my room with cake and tea. I’m glad I bought the cake since I heard Eriko was coming.

“I’m coming in. You know I like shortcakes, don’t you?”

“Yeah, I chose cheesecake after all.”

“Fuhahaha! Thank you and honor me more, Queen of the Foul World!”

“If you call me that name at school, I’ll kick your ass…”

She clenched her fists and threatened me. I raised my hand in surrender. I think it’s good that the class knows about it anyway, but it’s not like that. We’ve known each other since childhood, so we know each other’s food preferences. I like sweets like crazy, and she likes rather light foods.

“You know, don’t talk about my personal life in front of my mother…”

“I’m sorry, I just thought she’d know already since you guys are so close…”

We start eating the cake.I knew Eriko was good at making tea. Once I had a cake with Orangina and she looked at me like I was a monster, so I started bringing her cake and tea. Isn’t that awful? Orangina is the national drink of France and goes well with all kinds of food.

“That reminds me, I was wondering… is Sacchan a Chuunibyou too?”

Then she threw a box of tissues at me, and I unintentionally blew out my tea. Beni is being suspected!! Well, she’s a clumsy person after all…

“What makes you think that…?”

“No, she says some very strange things sometimes… And when she hears the words witch or magic, her eyes light up like yours.”

“A-Are you sure you’re not mistaken…?”

“Well, if that’s what you say, then that’s what I’ll say too. So, what do you like about her?”

Eriko asked with a nasty look on her face. *Hii, she shifted it to love talk. I’ll have to make sure she doesn’t find out we’re just a couple in disguise.

“She’s my ally, she’s the only one who understands me.”

“I’m sorry, I don’t understand you, please speak Japanese instead of Shinya.”

“Oh, yes… because she understands the Chuunibyou side of me and we can do stupid things together. I found myself liking her.”

Eriko looked at me like she didn’t know what I was talking about. No, I don’t understand it either. But it’s not about logic. Before I knew it, I had fallen in love with her. It was as if a witch had cast a spell of enchantment on me. Well, I’ve never been bewitched before though.

“I thought I understood Shinya… but I feel like I’ve been left behind.”

I’ve never seen a more mature face than hers, and I thought it was cute. Silence had reigned in the room. I don’t remember her being this mature…? I’m not sure if it’s the gap between her and me, or if I would have fallen in love with her if Beni hadn’t been there, but her expression was so fragile and beautiful.

I hit myself with the Fafnir sword that was propped up on the wall as if to disguise the turmoil in my heart. What am I thinking about with my childhood friend!? It’s bad for Beni, too! No, we’re a fake couple, so what does it matter?

“Eh, what the hell are you doing? Your head is… too far gone. Do you want to go to the hospital?”

“No, I’m fine. I’m under some kind of illusionary spell…”

Eriko was the same Eriko who looked at me and held her head. The strange atmosphere from earlier had dissipated.

“What about you, what do you think of Okita?”

“No, I don’t think so. He ignored his ex-girlfriend’s line and played shadow games. That’s why she broke up with him. He’s a jerk.”

“That’s out of the question. Oh, I’ve been curious about the rest of the manga. Let me read it~.”

“Oh, have it your way. Anshinin is much less of an interest than a manga anyway…”

We spend our time together. If you’re close to someone, you don’t need to force yourself to talk to them. I think it’s great to have a relationship where you can just be together and feel at home. Eriko sometimes says things in a tone of voice that girls normally shouldn’t say while reading manga, like, “Lololol fufufu~, these two are so cute.”

So we spent the rest of the day as usual until Eriko’s parents contacted her.

Translator’s Afterword: Err, I’m sorry that I nearly forgot that I’m doing this series. Man doing 7 at a time is quite a task alright. I’ll try to update more to compensate! (Tbh it’s really hard TL-ing this series with all the chuunibyou stuff)

Also, thanks for all of the support that Matsu was finally able to buy his new phone! I hope you guys could help me too as I’m already 68% done with the goal! Any amount would do~ 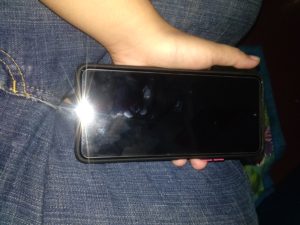 For some reason, a gal in my class became friends with my step-sister. “Can I go to your house today?”