Prologue – So You Won’t be Lonely

The sound of the instrument transformed the well-narrated story into a poem.

The story of a love between a princess and a knight flowed beautifully from the mouth of the bard.

“And so, they overcame all obstacles, pledged their love and lived happily ever after.”

In the City of Rensath of the Holy Augusria Empire, inside the tavern called ‘The Quiet Banquet’ located in the back alley.

The place itself wasn’t a noisy place to begin with, but ever since the bard started their performance, it became quieter than usual.

Everyone was listening to the story while enjoying their drinks. This place was a well known tavern that I frequently visited whenever I visited Rensath.

As the bard greeted the audience, a stream of applause echoed through the tavern.

Apparently, said bard was a famous one. People in many places recognized his skills, including us, as we didn’t get tired listening to the bard’s words.

Even so, the only one who sobbed uglily after hearing the story in this tavern was this woman beside me.

She was the great sinner who plunged the world into disaster, the Witch of Calamity, Cerys Flores.

“That so? I just think that the story is good to listen to over a drink.”

“That’s what you said after listening to a beautiful story like that? I know that you’re a cold-hearted person, but this is too much…”

“It feels surreal that a witch would preach to me about being cold-hearted.”

On the other hand, I was the hero chosen by the church of the Holy Augusria Empire to defeat the witch.

No one in their right mind would think that the both of us would be sitting side by side inside a tavern like this.

“Hmph. Unlike me, you don’t have a human heart. If you did, you wouldn’t trample on my wish like what you did.”

“I’m only doing what I think is right. That’s my duty as a hero.”

Me and the witch had been fighting each other countless times.

At the end of everything, though, I decided not to kill her.

That was why I, Grey Handlet, decided to work with her for the moment.

“That’s why I called you an idiot. If you were to kill me, you wouldn’t need to hide in the dark like this. You could travel under the light of the sun with pride and glory.”

“Calling me an idiot, that’s rich coming from you. Also, you don’t need to keep repeating those words to me.”

I knew that this path I was taking would be ridden with thorns. After all, this was the equivalent of me making an enemy out of the whole world.

Still, I had no regrets for choosing this path.

“I might not be the hero everyone wanted me to be… But at least I want to be the hero I strived to be.”

“There you go again with your nonsense. I’m sick of hearing it.”

She shrugged. In this dimly lit tavern, her face was hidden under the hood, so it was hard to tell her expression. I could guess that she was exasperated, though. 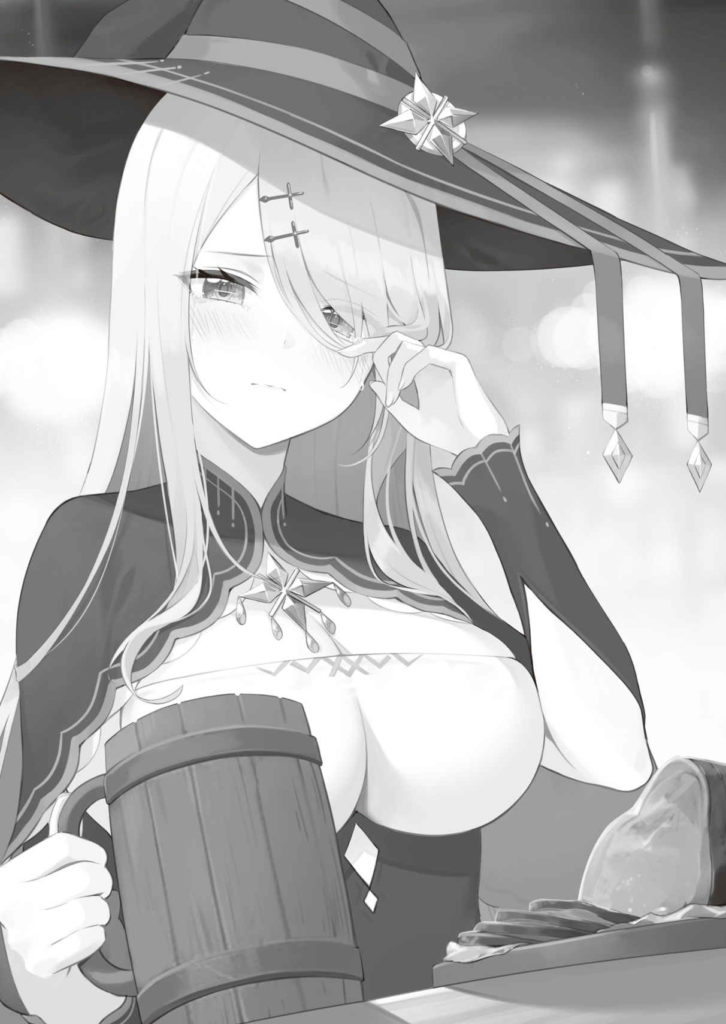 Like her, I also wore a hood to hide my face.

This place would still serve us even if we dressed conspicuously like this as long as we paid.

Other than us, there were also one or two people who clearly had their own history quietly enjoying their drinks.

Though, even those people would have had their eyes come out of their sockets if they were to know that the woman who was crying like a child after hearing the bard’s story was the Witch of Calamity.

“That’s because you cried too hard.”

So, were those ugly sobs I heard an illusion?

Well, even if I tried to confront her, she would deny it anyway, so I won’t bother to.

As the bard was preparing to leave the place, I asked the witch.

“Yes… Only in stories people won’t condemn me…”

I couldn’t say anything after hearing those words.

Come to think of it, she always read random books she collected from everywhere in her spare time.

Whether it was mythology books, novels, autobiography, any books she had in hand, she’d read it.

She looked unusually relaxed as she said this.

It was the first time in my life that I’ve seen her making this kind of expression.

I, too, had read through the books that witch had read.

But none of them resonated with me. Rather, I didn’t understand the point of them.

“Have you ever fallen in love with someone?”

When I asked her that, she looked at me with a puzzled expression on her face and said,

“The whole world hates me, how could I find someone to fall in love with in the first place?”

Her tone was decisive.

It was sad to hear it coming from her mouth, but her words were true. Besides, I didn’t know what love was either.

Since I didn’t know what it was, I had no right to talk about it. Hell, I couldn’t even be moved by it.

“How about you? Have you ever fallen in love with someone? You can choose whichever girl you like, right?”

‘You’re the hero after all’, said the witch.

Her words were true. I had been invited by the nobles on several occasions. During those times, noble women would come up to me and flirt with me, dressed with their fancy clothes and pretty faces.

But, even I knew that they were only trying to make a good impression on me. I was a hero, someone worth using. They approached me because they could gain something from me. There were no feelings such as love involved there.

“I’m just a monster being bound by the leash of my role as a hero. That’s what the nobles thought of me as. It’s only the commoners who would naively believe me as a hero.”

After all, I was merely a ‘weapon to kill the witch’ and a ‘tool to save the people’. Everyone who knew about it would never treat me as a human. Their friendly faces were merely pretense.

On the contrary, the commoners who knew nothing placed their expectations on me. They worshiped me and gave their faith in me. But at the same time, they didn’t want to approach me, as I was God’s chosen. Approaching me was deemed as something disrespectful.

And so, no one tried to approach me and treated me like a human.

“I see… To everyone, you’re a distant existence…”

And now, I became a mortal sinner who disappeared along with the witch.

The commoners would hurl me with stones for betraying their expectations and the nobles would try to kill me because they couldn’t contain me anymore.

Since the whole world had turned against me… No, against us… Love was nothing but a pipe dream for us.

The witch laughed softly as she shook the wine bottle in her hand lightly.

“You can’t even smile properly, of course no one would approach you.”

“I don’t really care. I don’t mind being alone. Love doesn’t suit heroes to begin with.”

When I muttered this, the witch shrugged and said ‘that’s a lonely way to live’.

“It can’t be helped then. Let’s live our unhappy lives together.”

‘This way, you won’t be lonely’, she continued.

“Let’s just say it’s karma for you who refused to give me my happiness.”

I agreed with her words. This was my karma.

I betrayed the church and the world.

But, that was because I didn’t want to accept such an ending for her.

‘…Right, it would be lonely if I’d just die like that, hm? Alright, let me tell you a story about a poor witch. Don’t forget it later, okay? Think of it as a last gift from me.’

And so, I decided to teach this woman how to be happy. This foolish woman who treated a tragedy as happiness.

For that, I was willing to go to hell.

That was why I refused to be unhappy together with her. I should be the only one who felt unhappy.

And so, I vowed in my heart.

Support me on ko-fi!

I Went Out With a Losing Heroine, But Before I knew It, My Childhood Friend, Who’s Supposed to be The Winning Heroine Thought We Were Dating, Got Angry and Went Into an Argument