I was going to typeset all of these, then I realized how washed up I was and stopped. I also realized that I could just number the text so you all could refer to the translation in text. Genius idea on my part to spare you from my horrid typesetting. Thanks Peace for cleaning even though I didn’t end up using those files. As always, please consider supporting the author by buying the raws from a website like https://bookwalker.jp/series/134738/list/. Also sorry for the delay on these, I was hoping the illustrations would be able to give you all (as well as me) a better view of where things are in the world and clarification on certain locations like Unclaimed Lands. I’ll have Prologue and tentative schedule out by tomorrow, but I don’t really have a set date for when I’m going to finish this series. That’s mainly because I’m trying to get as far ahead on (Naze Boku) manga translating as possible, and I’d have to push to get all of this volume done before school starts in late September. With that said, hopefully I can finish everything by no later than early October. 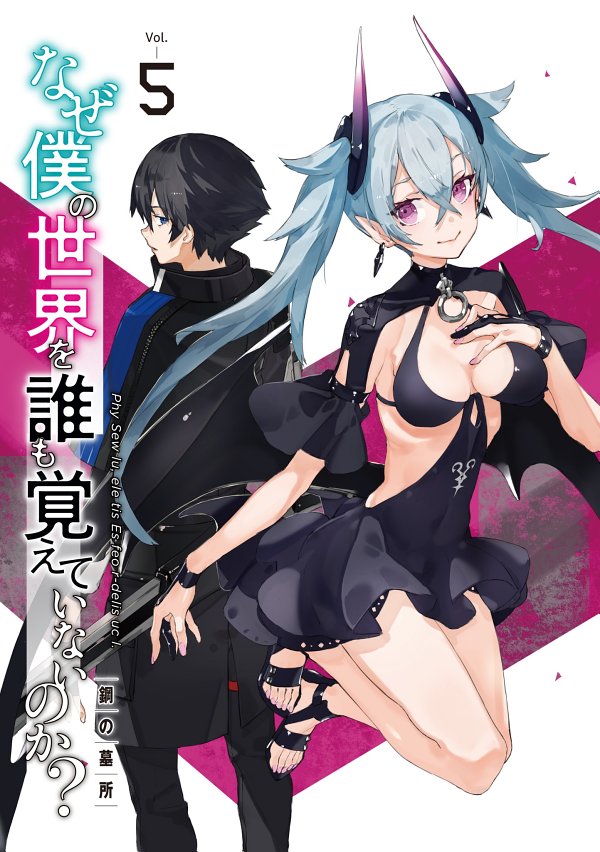 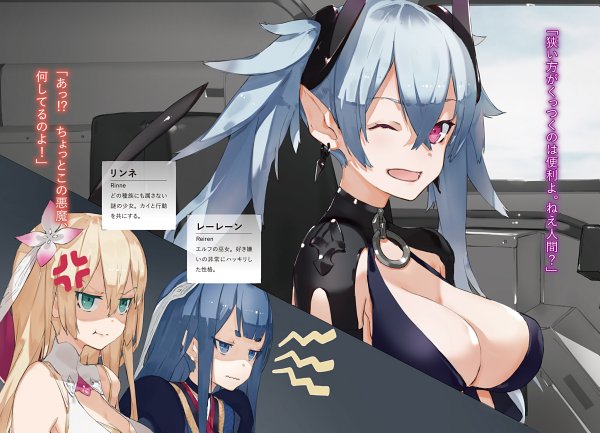 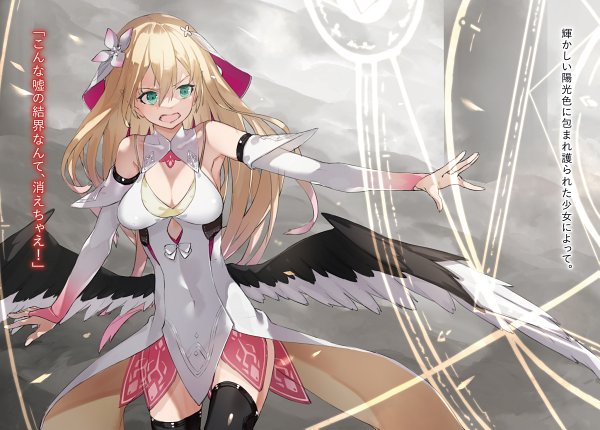 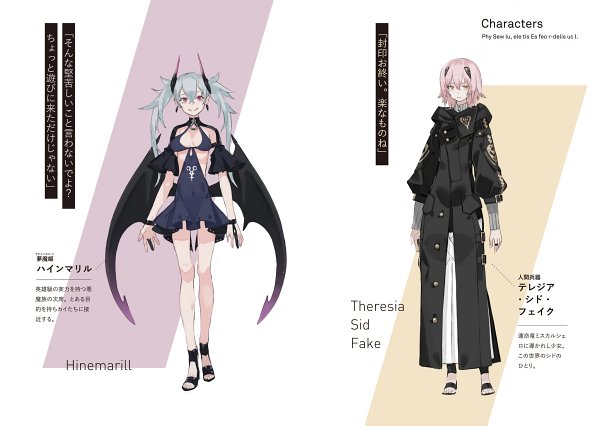 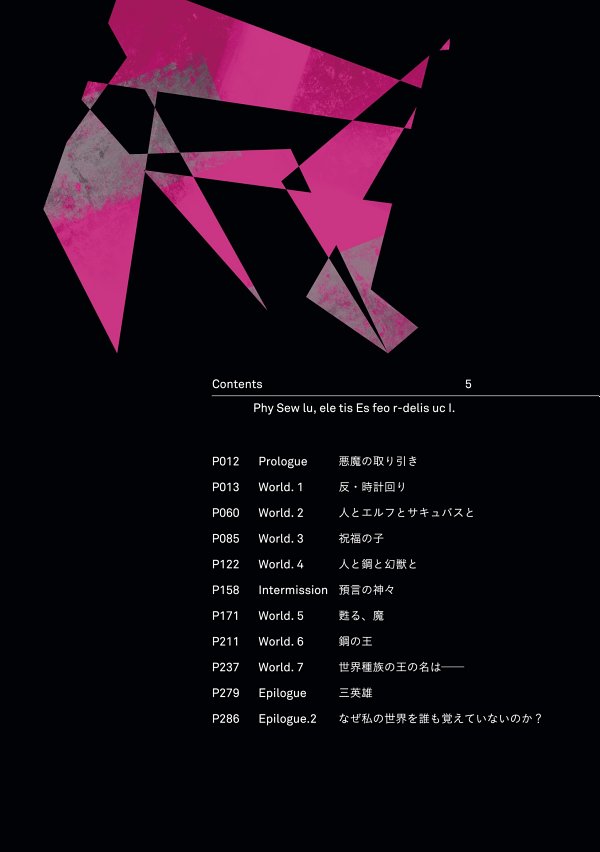 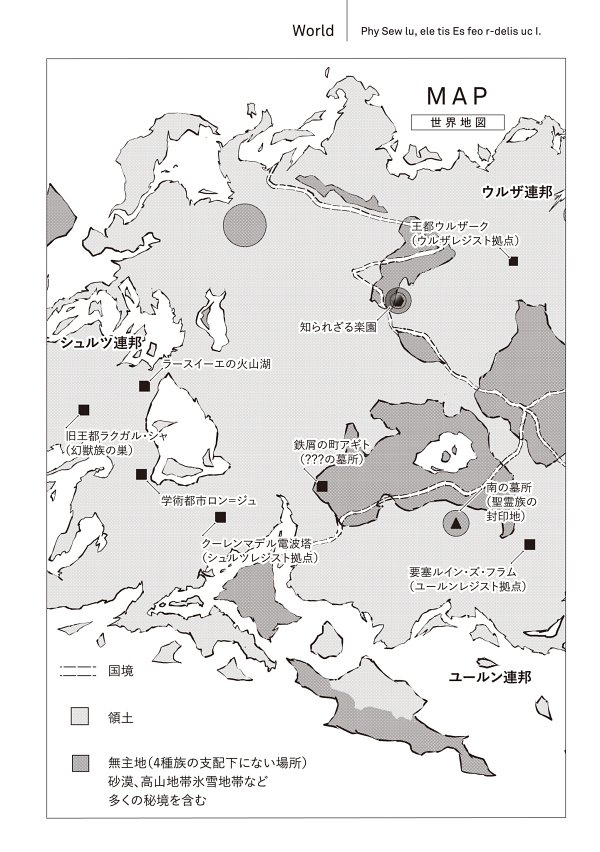 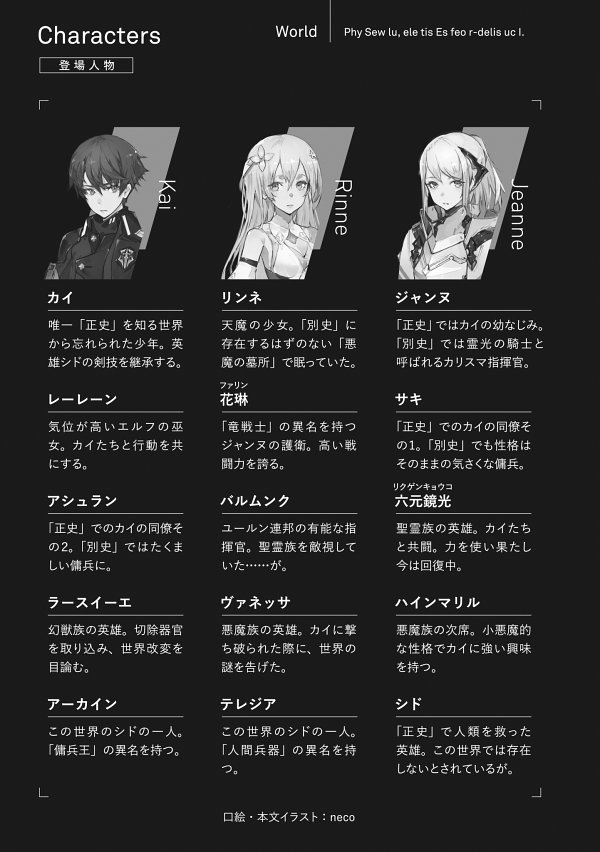 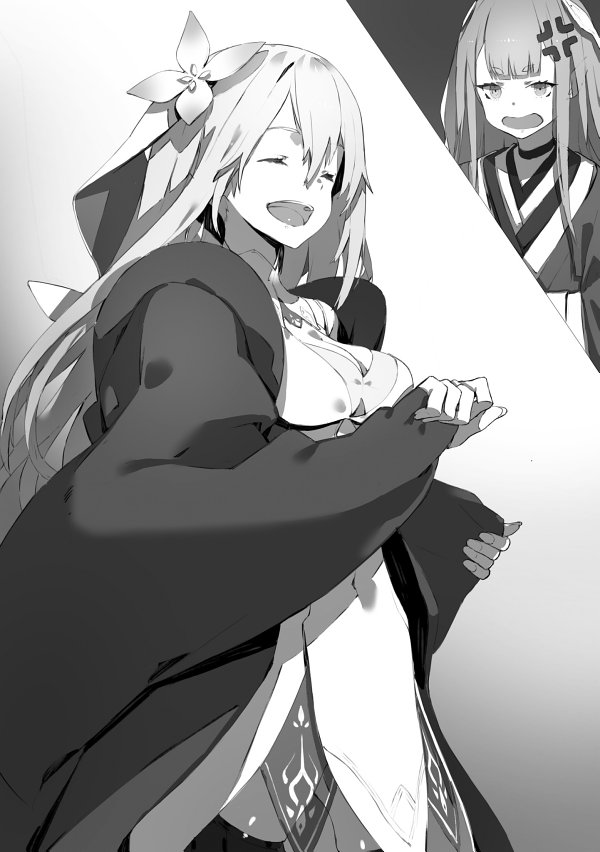 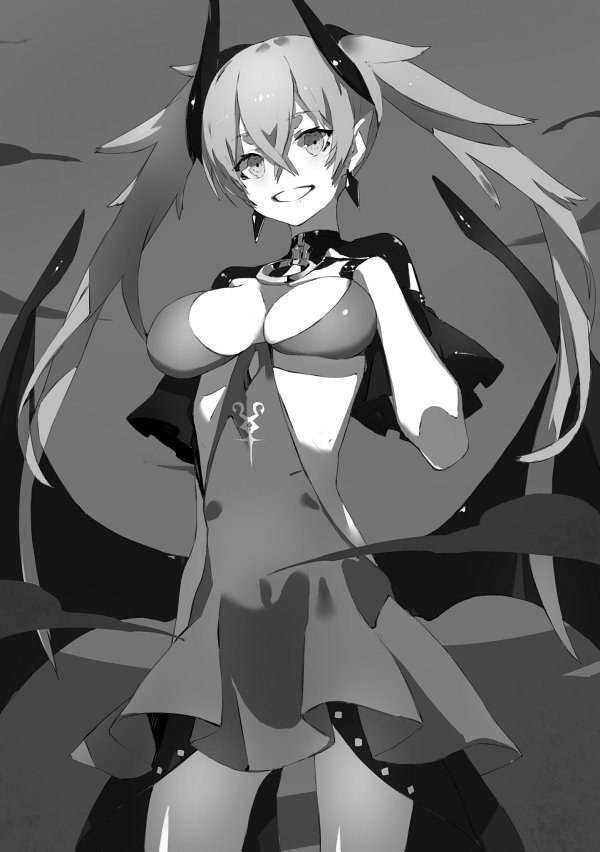 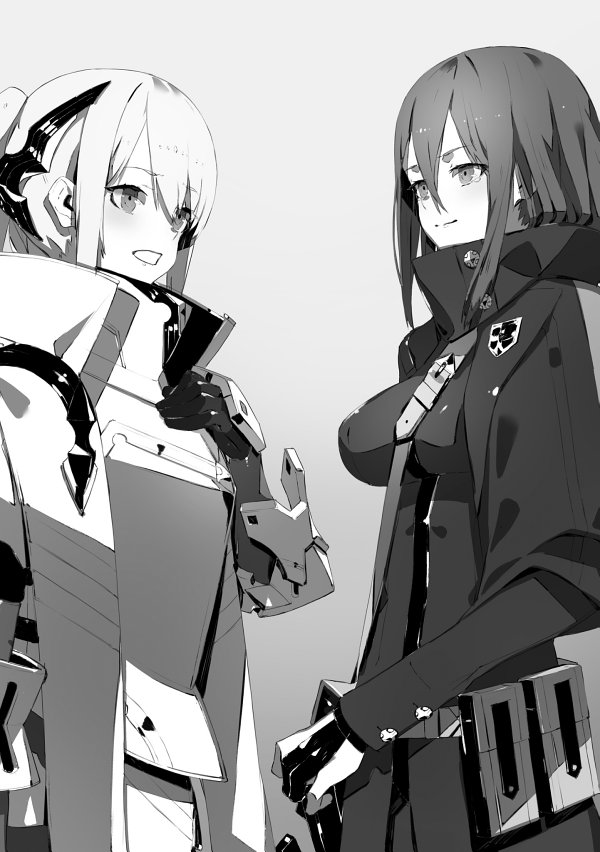 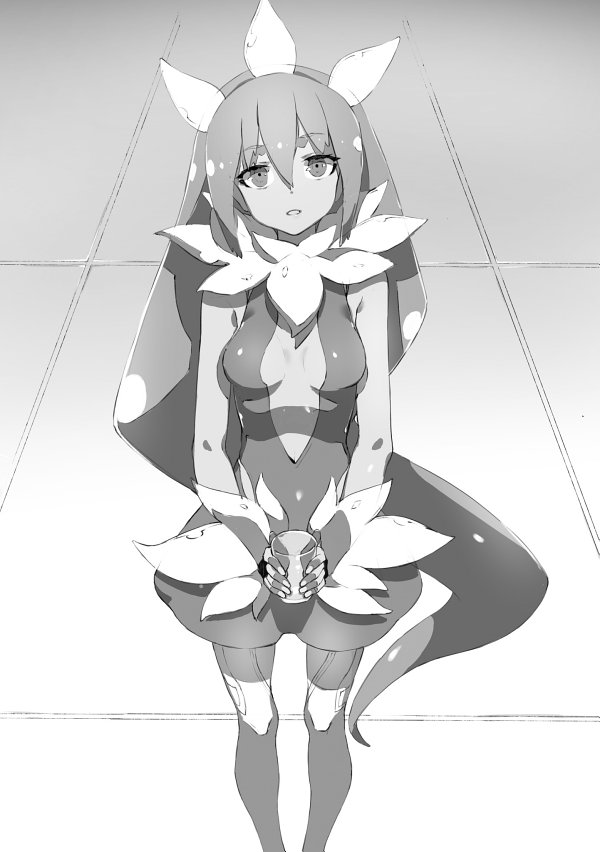 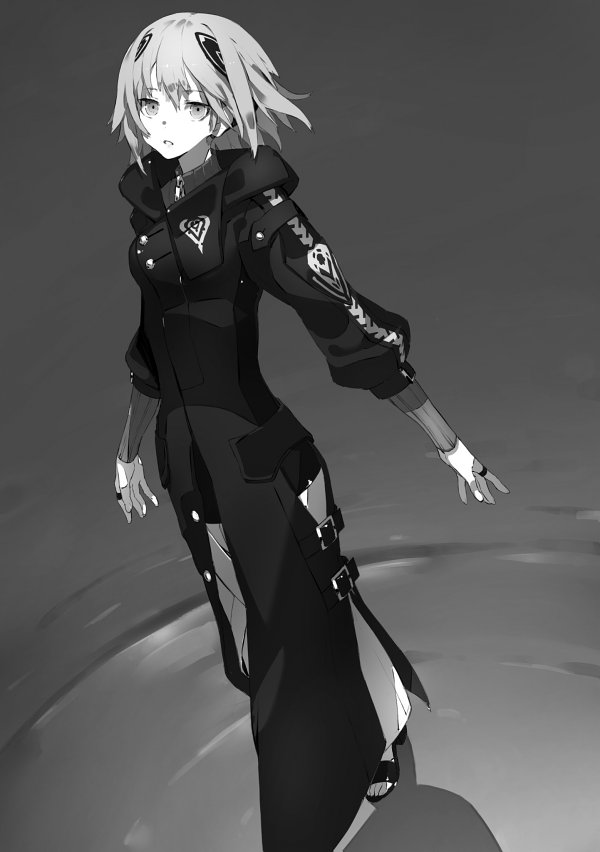 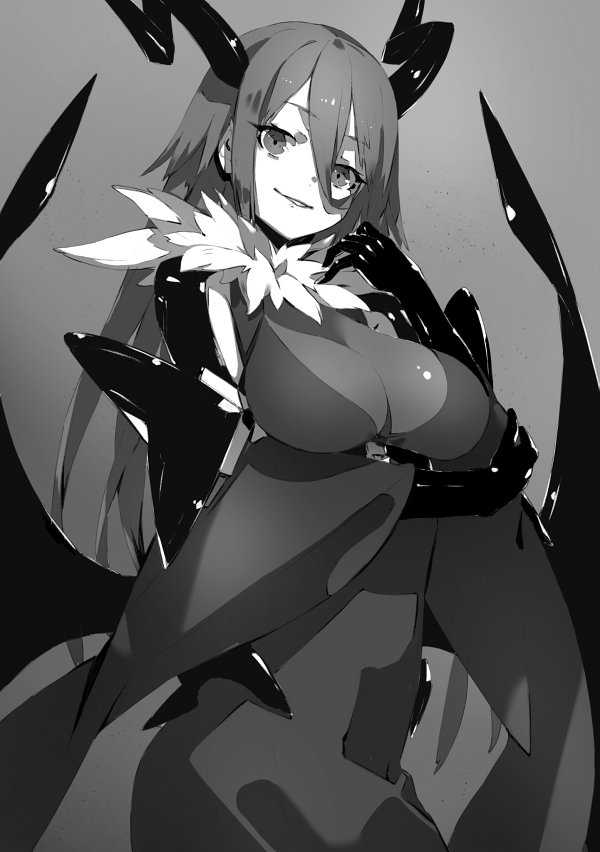 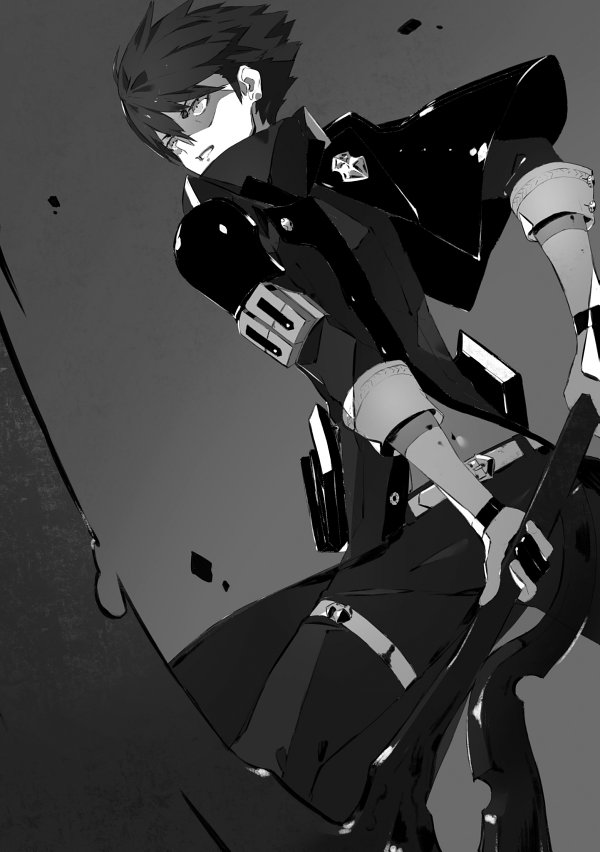 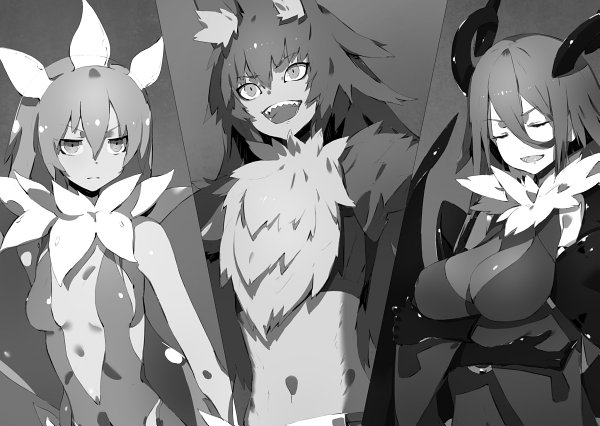 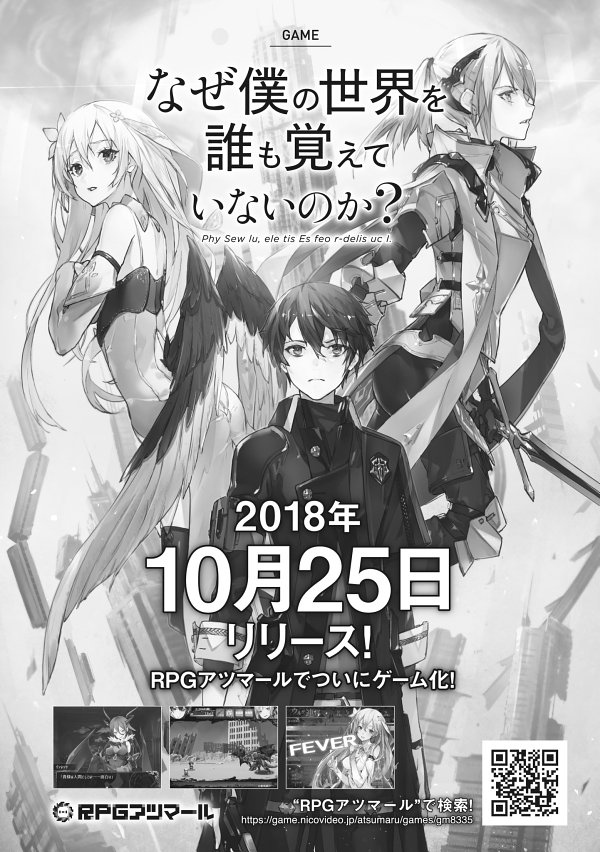 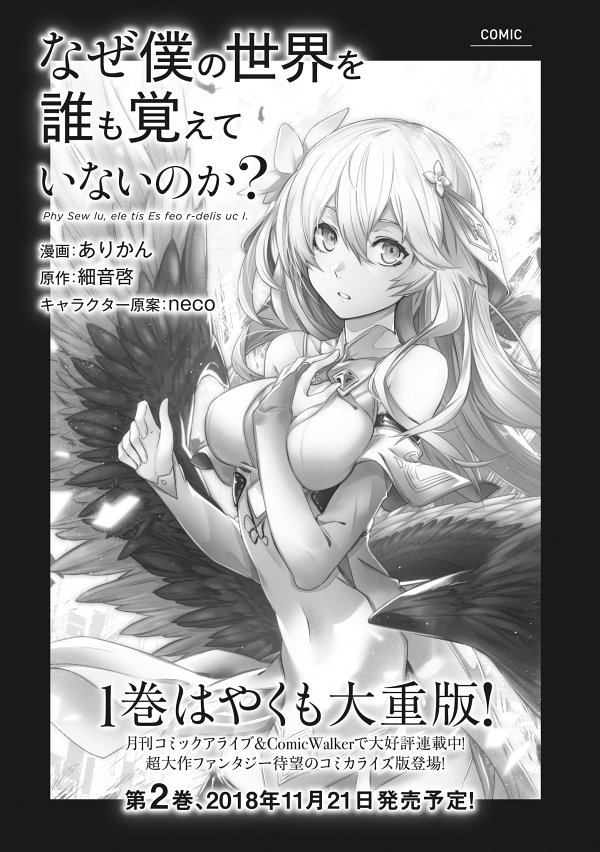 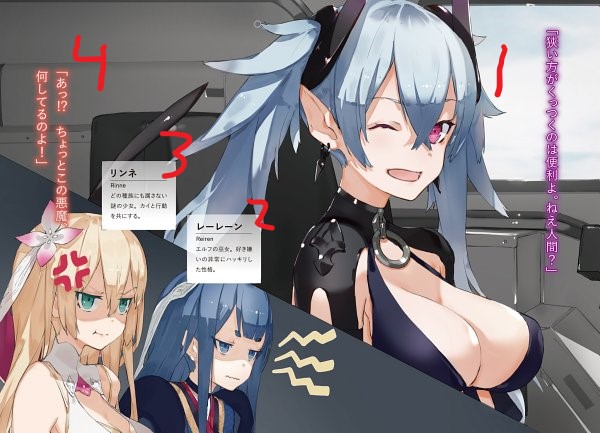 Please note that when I say I can’t read something, it doesn’t mean I could read the Japanese and wasn’t able to translate it, but rather that I couldn’t even read the text because the picture was too low resolution. That’s also another reason why I decided not to typeset, because the typesetted text would be really cramped and hard to read.

1:「The more narrow-minded you are, the easier it is to stick together. Isn’t that right, humans?」

a Underneath: (can’t read the description, something about being an elf shrine maiden)

Underneath: She’s a girl who does not belong to any race. She works with Kai. 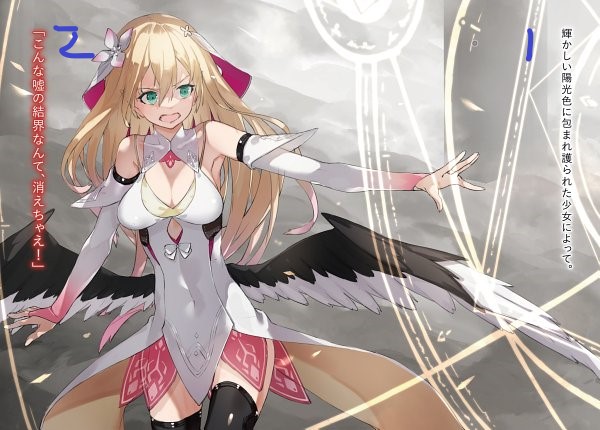 1: Due to a girl surrounded and protected by a glorious sunlight color.
2: 「The effect of such a lie, disappear!」 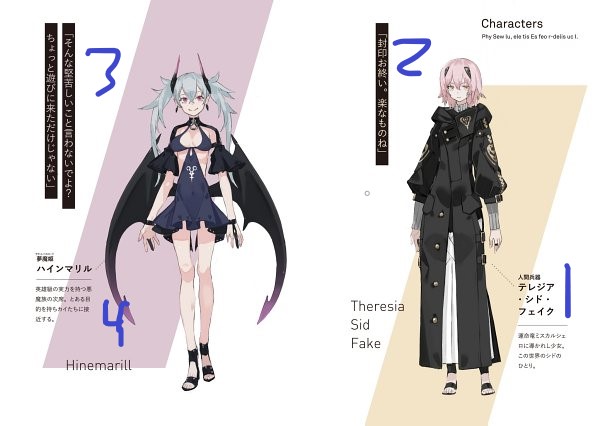 Underneath: I can’t read this

3: 「Why is your speech so formal? I only came to play a little.」

Underneath: I can’t read this

Interestingly enough, the “my” used in Epilogue 2’s title uses the pronoun “watashi” instead of “boku” for “Naze Watashi,” and you might have noticed that the title of this series is “Naze Boku.” This suggests to me that Kai is probably not being referred to here but most likely Rinne or some other female character. “Boku” is a male pronoun, so you’d expect Kai to be referred to in the title “Naze Boku,” whereas Rinne, the most important female character from the series up to this point, would use the slightly feminine “watashi” (pretty much guaranteed feminine in a casual context, which is probably the case here). I’m not spoiling though, as I haven’t read anything from this volume yet. Just pointing it out, since I feel like that nuance would get lost in translation. But whoever it refers to should be obvious by the time we get to that chapter.

P286 Epilogue. 2 Why Does No One Remember My World? 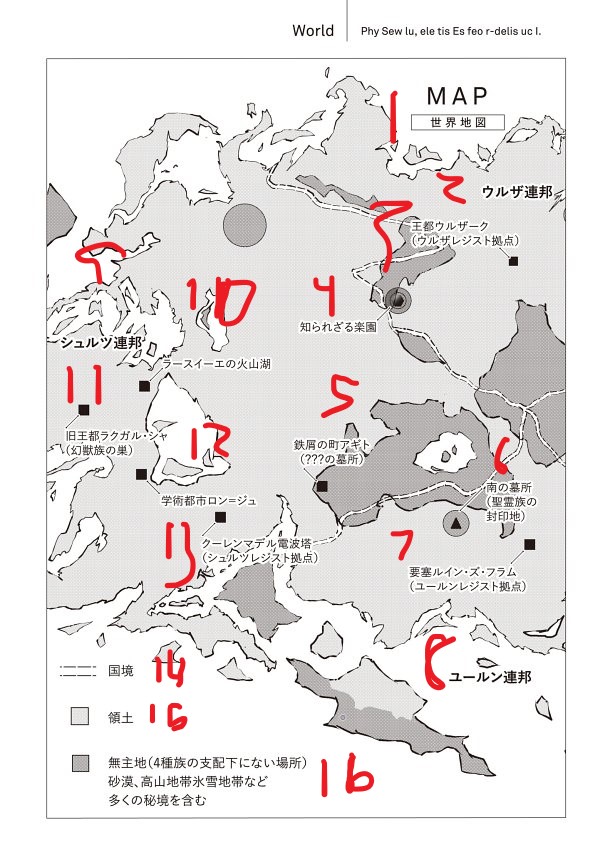 Badly drawn 15 above the 16, but hopefully that was intuitive anyway.

Underneath: (Urza Resistance Base)

Underneath: (Sealed Grounds of the Holy Ghost Race)

Underneath: (Schultz Resistance Base)

16: Unclaimed Land (A place not under the control of the four races). Containing many secluded areas such as deserts, tall mountain regions, and ice and snow areas. 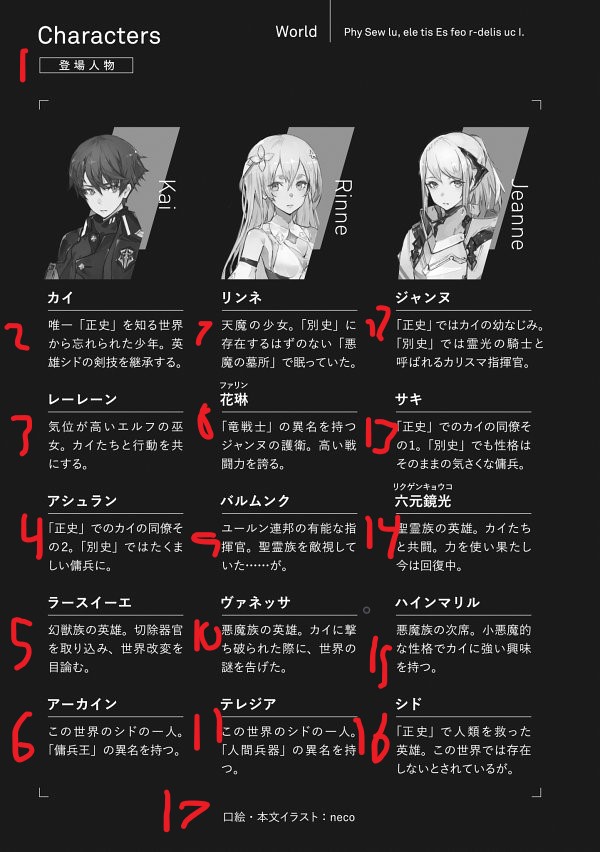 Underneath: Justー A boy forgotten from the world who knows the「canonical history」. He inherited the swordsmanship of the hero Sid.

Underneath: A high-spirited elf shrine maiden. She works with Kai and the others.

Underneath: Kai’s second colleague in the 「canonical history」. A strong mercenary in the 「alternate history」.

Underneath: A hero of the cryptid race. He plans to alter the world by taking in the rasterizer.

Underneath: One of the Sids of this world. He is also known as「Mercenary King」.

Underneath: A tenma girl. She slept in the 「Devil’s Graveyard」that should not exist in the 「alternate history」.

Underneath: A talented commander of the Yurun Federation. He is hostile to the holy spirits……

Underneath: A hero of the devil tribe. When she was defeated by Kai, she told him the mystery of the world.

Underneath: One of the Sids of this world. She is also known as 「Human Weapon」.

Underneath: Kai’s childhood friend in the 「canonical history」. She is a charismatic commander known as the Knight of Holy Light in the 「alternate history」.

Underneath: Kai’s colleague 1 in the「canonical history」. She is a friendly mercenary with the same personality in the「alternate history」.

Underneath: A hero of the holy spirit race. She fights with Kai and the others. She has used up all of her strength and is now recovering.

Underneath: The second in command of the devil race. She has the personality of a young seductress and has a strong interest in Kai.

Underneath: A hero who saved humanity in the 「canonical history」. Not believed to exist in this world. 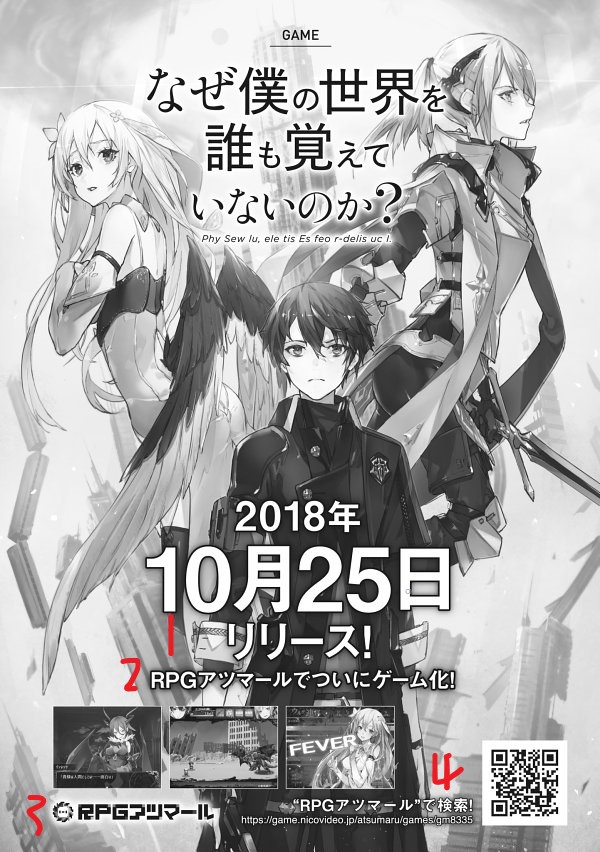 2: Finally made into a game with RNG Atsumaru! 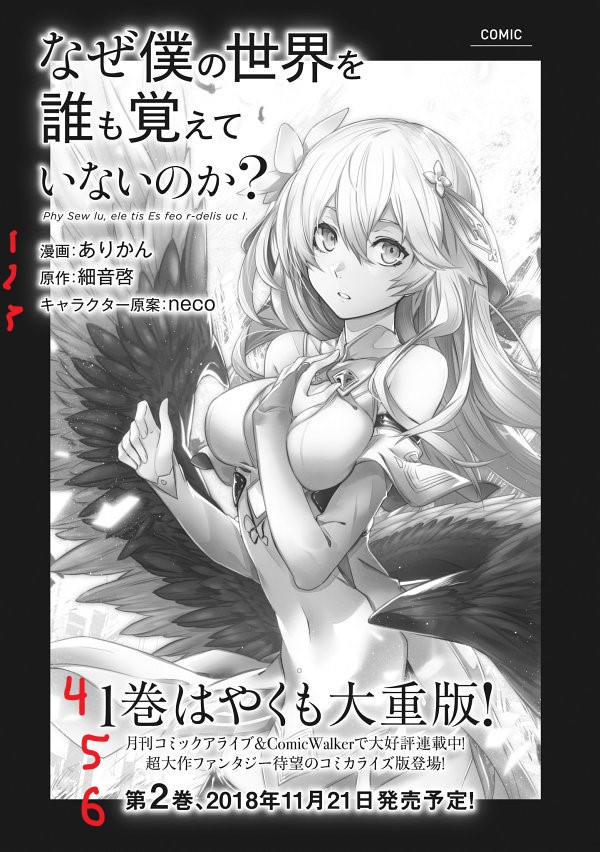 4. Volume 1 is already in a large reprint!

Underneath: The long-awaited comicalized version of the spectacular fantasy is here!

I Want To Make The School’s “Silent Princess” Talk, So I Invited Her (Who’s Super Cute) Out On A Date Today. ~Anyways, She’s So Very Intense When It Comes To Skinship, That It’s Going To Take My Reason Away~