I (30), Who Works for a Black Company and Died While Regretting My Gloomy Life, Started Over From High School! - Chapter 55

As the cheers of victory poured out onto the field, I sat up and stared blankly at the ball in my right hand.

I was so self-conscious while I was playing, but when I woke up from my trance, the ball in my hands and the excited voices of the visitors didn’t feel real anymore.

“That was almost a home run, and you caught it.”

“Ha-ha-ha! It feels good to win with all this excitement!”

The next thing I know, my teammates were gathered all around me, smiling and praising me like a child genuinely happy with a victory.

Just like at the launch of a cultural festival, I was stunned by everyone’s words and bathed my whole body in them.

I couldn’t believe that I was in the middle of a scene honoring the meritorious after a victory that I only knew from baseball cartoons.

“But I just happened to catch the last ball. To tell you the truth, this is the first time I’ve worked as a fielder in this game.”

“Haha, don’t worry about the details! It’s inevitable that the last home run or fine play that decides the game will stand out!”

The one who said that was Tsukamoto, the pitcher who had definitely worked 100 times harder than me throughout the entire game.

“I mean, you really saved my life, too! When the ball was hit at the end, my blood drained out of my body so much, but when you caught it, it suddenly rushed back. I was so grateful that I shouted, ‘Great job, Nihama!’ Thank you so much…!”

Apparently, the pressure of a pitcher on the verge of victory was unbelievable, and my catch had saved his cold nerves.

“Yeah, you did a good job! Ball games are inherently intimidating, but when you got girls screaming at you like this, you got to win!

“I laughed a little at the way he caught it because it was so gutsy, but nice catch, skinny guy!”

I’m not sure if it’s because I’m drunk with the enthusiasm of victory, but everyone honestly congratulated me on my little victory.

It’s not like they were this flippant in my previous life… but if this is how they became after the festival, it’s probably an unexpected side effect of my efforts to raise Shijoin-san’s favorability.

It was a good feeling to win with this team and to be able to share the joy with these guys.

“Okay… Now that you mention it, I’m starting to get excited and feel good about myself! I didn’t feel like I won until just now, but I’m going to scream too!”

“Come on! Everyone’s already yelling at the top of their lungs!”

I took a deep breath as I listened to everyone’s light-hearted comments.

So now — let’s shout out our joy honestly.

My victory cry echoed across the field as I struck a gut-wrenching pose, surrounded by my teammates.

“Fu… the water is super tasty…”

I was at a water fountain at the edge of the playground, quenching my thirst.

The heat in my body from the game I had just finished had not yet subsided.

I remember how excited my teammates were about our victory earlier.

In my previous life, I had only dark memories of ball games and other sports-related events, but… it was worth the effort to see them so excited.

“Even when I’m not good at something, I try my best…”

It was Mai Fumihashi, who had supported me the most this time, who suddenly called out to me from behind.

“I’ve been watching the game, and you did really well, Nihama-kun! I’m impressed!”

As if to say, “It was a great honor to be a coach,” Fumihashi continued in a good mood.

“That Nihama-kun, who couldn’t even catch a mediocre fly, caught such a difficult pitch at the very last… moment, it was really the best moment I’ve ever seen…! It’s as if a bird that was waddling around just a few minutes ago suddenly took to the skies and my heart was filled with…!

“Don’t get all gushy and teary! And is that rude compliment a habit of yours?”

There’s no denying that I’m a waddling bird, but come on!

“But I’m really grateful to Fumihashi-san… To be honest, I wouldn’t have been able to catch it if it hadn’t been for that spartan… and gut-wrenching training.

“It was worth coaching you if you say so! Oh, if you’re interested in athletics, would you like to join the track team?

When I dodged her casual solicitation, Fumihashi was disappointed, “Tch.”

”I’m sorry, Fumihashi. I’m sorry about that,” I said. This incident made me feel less bad about exercise than before, but it also made me realize once again that I don’t have any talent for physical activities at all.

“But I was able to see something really good! Nihama-kun, who is not very good at sports, played with so much enthusiasm! The power of love is amazing…! The moment Shijouin-san cheered for Nihama-kun with his name, his movements and spirit were completely different!”

“What…? No, I was definitely fired up, but did it make any difference in my movements?”

“Yeah! It was like they put a powerful motor in a spring doll and it was just overflowing with power! I’m sure it was unconsciously, but my mouth is saying, “Whoa, whoa, whoa, whoa!” And it leaked out!”

“But… I think I envy you and Shijoin, to be honest. Everyone loves someone, but I don’t think there are many people who feel that strongly about someone.”

“Yes, that’s it! And that feeling will definitely reach her! As your coach, I can guarantee it!”

The smile on her face is full of the vitality of an athletic girl, and it encourages me. But she’s a really nice girl…

“Whoa! Well, it looks like she’s here, so I’ll just leave you in peace! See you later!”

Abruptly leaving it at that, Fumihashi quickly left the place.

There was no way I could mistake the person I love for someone else.

But I still doubted my own perception, because Shijouin-san’s eyes were even more sparkly and shiny than usual.

And then… my hand, frozen in surprise, was wrapped in something soft and smooth.

Shijoin-san, who was right under my nose, was holding my hands as if she were wrapping them in her arms — there was a slight time lag for my brain to recognize this fact.

“That was amazing! To win so dramatically in such a final scene! That was the most exciting thing I’ve ever seen…!”

Still holding my hand, Shijoin-san shakes her arm up and down with a buzzing motion.

The feeling of the angel’s palm in my hands is silky and pleasant, but my head can’t keep up with her momentum.

“Sh-Shijoin-san…! I’m glad you’re here, but what’s with all the enthusiasm?”

“Huh? It’s a ritual to honor a good fight in softball, right? Fumihashi-san told me, “If you do it for Nihama-kun, he’ll be happy! When I asked her…”

You told her a complete lie.

But I’ll forgive you because it makes me happy! Well done!

Oh no, Shijoin-san’s vocabulary is even worse than it was during the final exam.

Her excitement is like that of an Osaka citizen when a certain tiger baseball team wins the championship.

“At the end, I felt so excited that I jumped up and down for joy! He couldn’t catch it with his glove, but he didn’t give up and went to grab it with his bare hands, and I was so excited…!

It was also very touching to see all the team members congratulating Nihama-kun afterwards!”

I could tell from Shijoin-san’s maxed-out excitement, at the highest it has ever been, that she was truly congratulating me on the results of my efforts.

It seems that Shijoin-san, who loves unity and youth events, enjoyed the game a lot.

“But it was good! It’s not only that we were all happy to win, but… Nihama-kun looked so happy.”

Shijoin-san, who had finished telling me how impressed she was, suddenly looked at me and said something like that.

“Yes! Nihama-kun didn’t seem to be that excited about the ball game, but… But today he seemed to be having a lot of fun, despite his mixed feelings of anxiety and nervousness.”

If you ask me, I’ve been nervous since the start of the… game, but I haven’t been sick to my stomach with fear of failure or wishing this game would end as soon as possible like in my previous life.

“I’m not very good at ball games because I have a terrible sense of movement. But it can be fun to scream when the other team hits, or cheer when your teammate makes a good play…”

It was Fumihashi’s special training that supported me.

But what made me want to do my best in the first place?

What gave me the strongest motivation for this match was…

“Thank you for your support today, Shijoin-san. At the end of the day, I was so happy that you cheered for me directly… It was outrageously motivating. Thanks to you, I was able to work the hardest where it mattered most.”

“I was so carried away at the time that I shouted, but you got my message. I’m embarrassed to say that no matter how enthusiastic I was about the game, I shouted a little too loudly…”

“I couldn’t help but shout… when I saw Nihama-kun running so hard.”

Shijouin-san smiled, leaving a blush of embarrassment on her cheeks.

Her words and smile, which expressed her clear, limpid heart, were so lovely and heartwarming. I fell in love with her all over again.
TLN: Just ask her to go out smh. Even better cross the line with her.

Just seeing this exhausted but excited look on Shijoin-san’s face was enough to make this time’s painful challenge to… athleticism completely worth it.

“‘Well, then, let’s go back to the classroom, where everyone is waiting for us! The teacher is going to buy us some juice!”

“Yeah, let’s go. We won’t be able to do a toast until all of us are in the classroom.”

Feeling pleasantly exhausted, Shijoin-san and I walked out together.

In the midst of all this, I suddenly realized that I was following the template of a sports manga.

The reason I started practicing was for the girl I love, and because of that desire, I went through a grueling training session, overcame my unconscious weaknesses, fought with my team, and in the end, just barely picked up a victory through sheer perseverance.

In my previous life, I was not only bad at it, but even an enemy to my own team.

TLN: Join our discord server by clicking this link. Also vote in kimirano 2021 for tonari kuudera in here https://form.tsugirano.jp/vote.php?id=25337 if it got top 10 I will increase the release rate for company slave, kuudera, and venomous. I know it isn’t company slave but it’s my other series in here; also good read btw. You can vote everyday until December 15th. To vote click on part where I mark as step in the image 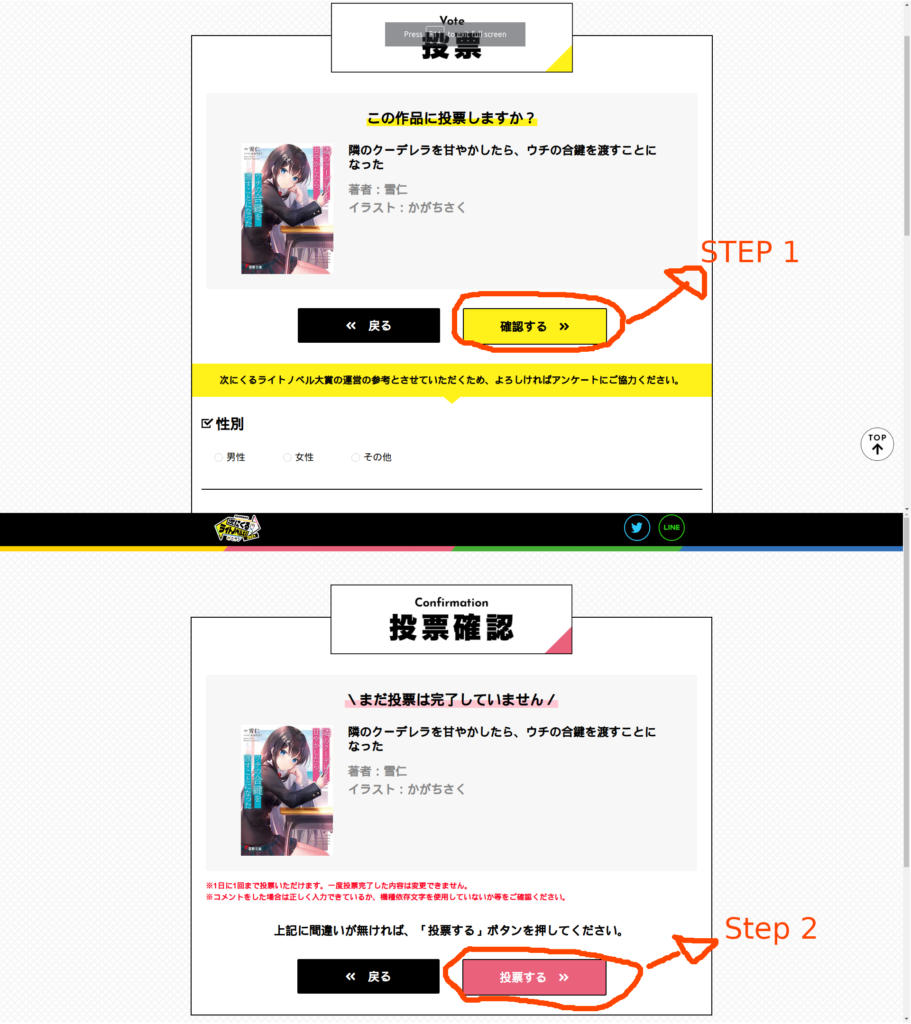