My Sister's Best Friend? My Female Friend Already? Then, What's Next―? - Chapter 9

After the shuttle run, the two guys who had been stirring me up so much were slumped down on the spot where I had finished running.

They were the real deal in the athletic department, with a record of over 130 shuttle runs.

However, I didn’t see much of their hard work because I was distracted by my conversation with the chairman.

Somehow I managed to get through the toughest PE class of the year.

“Can one of you two lend me some antiperspirant?”

Unlike me, who was too stupid to remember to bring antiperspirant at such a time, the two of them always had some on hand because of their club activities.

I borrowed one from Yukito, whose brand name I was not familiar with.

After we finished changing, the three of us headed back to the classroom.

Next is our lunchtime, so there’s no need to rush, so we’re taking our time.

I thought I heard a familiar voice from behind me, but then I was sprayed with something all over my body with a quick movement.

“You were worried about your sweat, so I was kind enough to give you a big spray of my own antiperspirant!”

She sprayed me with the stuff from some kind of adorably designed container.

It’s normal, but the unfamiliar smell is already hitting my nose.

“Hahaha! You’ll be dry in no time! Well then, farewell!”

After that, the chairman left with her friend, who laughed amusedly.

“That’s the worst thing you could say right now.”

“But it smells nothing like the antiperspirant we use… And it’s really strong, dude.”

“No, it only smells so strong because the chairman put so much on me.”

It’s true that the smell is different, of course, but the amount was clearly too much.

It’s similar to the smell my sister used to have in the summer, but it’s definitely a smell I’m not used to normally.

In the end, I spent my lunch break with this smell never leaving my nose.

After school today, Rin-chan and I met up at the same place as yesterday and decided to go home together.

It seems that something I said inadvertently yesterday surprised even my sister, who doesn’t care about details at all.

After that, the situation changed slightly, so I threw all the responsibility to Rin-chan, but how did it turn out?

“Thank you for waiting~.”

“Aye, thanks for your hard work. Shall we go home then?”

I started to pedal my bicycle slowly.

“Did you talk to my sister yesterday?”

“Yeah, I did. She asked me a lot of questions… Did you say anything to her?”

“No, I told her what happened yesterday and what I’m going to do about it, and even she was surprised.”

However, the exchange itself didn’t turn out to be that troublesome, and she was smiling happily.

“What happened with Onii-san!? She asked me a lot of questions.”

“That’s a private conversation for girls. But I didn’t say anything too strange.”

I was relieved for the moment.

Well, that girl would have poked me in the morning if there was something on her mind, so I thought it was fine when she didn’t do that.

“More importantly, Onii-san, there’s something I want to ask you, too.”

“I know, because I use antiperspirant that smells like that.”

I should have told her in a normal way that a girl in my class had put it on me for fun.

However, just when I was letting my guard down that the smell had settled down completely, I got startled and staggered.

At this moment, I was stopped at a traffic light with a long waiting time.

“Onii-san, are you trying to be a neutral type of guy, like what’s popular now?”

“No, I can’t because my face isn’t good enough.”

My skin is not that beautiful white, and my face is not even remotely cute.

“That’s true you say… There is no meaningful reason for this. My friends were amused and sprayed me a lot. It’s not so bad now, but right after it was sprayed on me, it smelled pretty bad.”

“Your friend is a woman, right?”

For some reason, Rin-chan let out a voice that seemed like she was unhappy.

“Is she a good friend of yours?”

“Hmmm. We were friends of friends, and one of my friends liked her, so it was hard to talk to her. I had a chance to talk to her for a few days, and that’s how it started.”

When I look back to talk to Rin-chan like this, I realize that even though she has a cheerful personality, the chairman is getting involved with her.

“Do you care about that person, Onii-san?”

“Hmm. She’s definitely a very popular girl, but I’m not even sure if I’m attracted to her or not. She seems to have high ideals, so I haven’t really thought about it.”

The other person’s level is so high that I haven’t even given it a second thought. 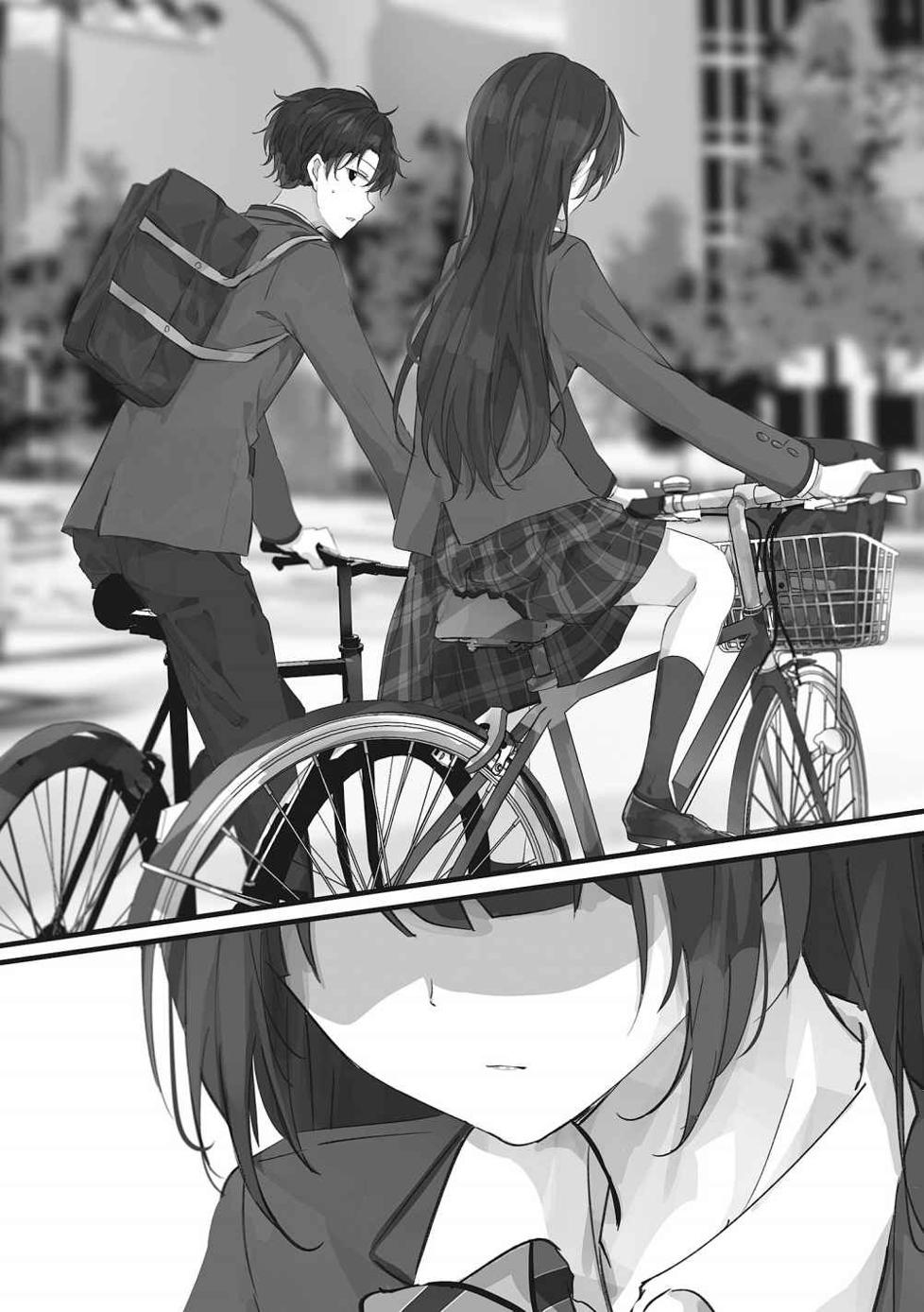 With that in mind, I was rather curious about the kind of person the chairman used to date.

That said, it’s a taboo to ask, so I guess I’ll never know.

“Are you curious about her?”

It was rare for Rin-chan to ask this much.

Maybe, if she doesn’t plan to join a club or something, she might want one of the older female students to be able to rely on.

If it’s the chairman, she’s too dependable, so if that’s the case, I’d be happy to introduce her.

“Not really! I was just wondering what Onii-san and that girl was like.”

I didn’t expect her to ask me such a question out of concern, so I asked her why.

However, after a short pause, she said in an accusatory, slightly quiet voice.

Then she glanced at me, and Rin-chan’s face turned a little red.

I didn’t know what I had done wrong, but her expression made me realize that I should apologize.

“If, hypothetically, you get to know that person better, I’ll forgive you… if you continue to treat me well.”

As she said this, Rin-chan grabbed the sleeve of my clothes.

Just like yesterday, this girl’s gestures are really sneaky.

Even if she’s worried, I’m not going to give up on her.

The traffic light changed and we were able to proceed, but we were both stuck for a while.

The girl who cheered me up through a “consultation app” after I broke up with my girlfriend of three years was a beautiful girl who was secretly one of my classmates – who wouldn’t fall in love with someone who told them “I’ll be there for you until the day I die.”?