I Went Out With a Losing Heroine, But Before I knew It, My Childhood Friend, Who's Supposed to be The Winning Heroine Thought We Were Dating, Got Angry and Went Into an Argument - Chapter 22

After deciding on a time and place to meet, and finishing their business, Yō tried to hang up the phone.

When Yō was about to touch the icon to hang up the call, Marin let out a sad voice.

She said it was nothing, but her voice sounded as if there was something wrong.

So Yō imagined Marin’s current state of mind and opened his mouth.

“You don’t have to hesitate. If there’s something you want to say or ask, I’ll listen.”

Yō assumed that Marin wanted to ask him about his relationship with Kasumi, and told him so.

However, what Marin said was far more than what Yō had imagined.

“May I, call you again tomorrow…?”

She said something to Yō that she would only say to someone of the opposite sex that she was interested in.

Yō couldn’t help but fall silent and think about why Marin said this to him.

Then Marin continued to speak out, perhaps because of Yō’s silence.

Even though Yō couldn’t see Marin’s face, he could still picture her looking up at him.

He then put his hand on his forehead and opened his mouth while looking up at the sky.

“No, I don’t mind. If it makes you feel better, you can use me all you want.”

When Yō said that, even through the phone, you can see that Marin gasped.

(I got the picture now…)

With that in mind, Yō spoke up again.

“I’m not accusing you of anything. I don’t blame you. If you don’t have to suffer by using me, I’m fine with that. As I said before, if it helps you, you can use me however you want.”

When Marin heard Yō’s words, she asked him with a slight tremble in her voice.

“I’m not trying to be nice. I’m just doing what needs to be done.”

He answered bluntly, but to be honest, he was aware that he was stepping in more than usual.

But that was also because he thought it was necessary for Marin right now.

Originally, Yō had intended to have a win-win relationship with Marin.

He was going to help her forget her feelings for Haruki and free herself from the pain, and he was going to show her more beautiful things by working with her.

However, once he grasped the situation, he could no longer be so carefree.

He had thought that Marin had just lost a love war, but she was actually the victim of Yō’s mismanagement.

This is the reason why Yō intends to serve Marin until this issue is resolved.

“You can do whatever you want with me, Akimi. But of course, if it’s not possible, I may have to say no.”

The world is not so sweet that everything goes along as you wish.

Even Yō has things to do, so he could not devote all his time to Marin.

Of course, that was partly because he needed to work to solve this problem.

After that, Marin said she was going to hang up the phone, and that was the end of the exchange between the two.

After finishing the call, Yō stroked Nya-san’s body and thanked her for her hard work in easing the atmosphere of the place.

Since Marin seems to like cats, he tried to make Nya~san do tricks, and the result was a great success.

After all, Yō thought that Nya~san is the best in his heart.

After laying Nya~san down on the cat bed, Yō tried to sleep as it was getting late.

He was about to turn off the computer, when he noticed a mail had just arrived.

He looked at the sender’s name and gasped.

Yō opened the mail, thinking about this.

Thank you for reading!

I’m sorry, but I’d like to hear your opinion here!

I’m having a hard time deciding between Marin’s gothic lolita outfit and the royal neat and tidy outfit!

Which one would make you happier?

I’d appreciate it if you could let me know in your comments!

Also, looking at the PV that was updated today.

The story right before the release of the latest episode was read by more than 16,000 people!

I’m really happy that so many people have read it!

However, it seems that there are an overwhelming number of people who haven’t bookmarked it.

I would appreciate it if you could bookmark this…!

If you like my work, I would appreciate it if you could give me a rating (☆☆☆☆☆ below) or a review, as it would be very encouraging (≧▽≦).

[TLN: You can find the raws here. Also, this is the latest chapter as of this writing.]

Translator’s Comments: Remember when I asked for donations to help me buy my birthday cake? (Those who’ve read my Lonely Otaku series would know of this) It turns out, my mother bought two on July 17. One for my birthday, and the other for my graduation from Senior High School (Grade 12)! 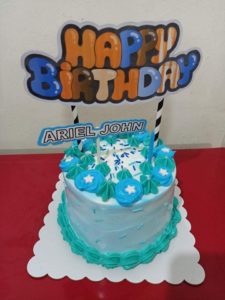